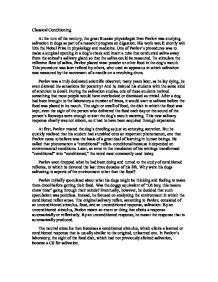 Classical Conditioning At the turn of the century, the great Russian physiologist Ivan Pavlov was studying salivation in dogs as part of a research program on digestion. His work would shortly win him the Nobel Prize in physiology and medicine. One of Pavlov's procedures was to make a surgical opening in a dog's cheek and insert a tube that conducted saliva away from the animal's salivary gland so that the saliva could be measured. To stimulate the reflexive flow of saliva, Pavlov placed meat powder or other food in the dog's mouth. This procedure was later refined by others, who used an apparatus in which salivation was measured by the movement of a needle on a revolving drum. Pavlov was a truly dedicated scientific observer; many years later, as he lay dying, he even dictated his sensations for posterity! And he imbued his students with the same kind of attention to detail. ...read more.

Later, an error in the translation of his writings transformed "conditional" into "conditioned," the word most commonly used today. Pavlov soon dropped what he had been doing and turned to the study of conditioned reflexes, to which he devoted the last three decades of his life. Why were his dogs salivating to aspects of the environment other than the food? Pavlov initially speculated about what his dogs might be thinking and feeling to make them drool before getting their food. Was the doggy equivalent of "Oh boy, this means chow time" going through their minds? Eventually, however, he decided that such speculation was pointless. Instead, he focused on analyzing the environment in which the conditioned reflex arose. The original salivary reflex, according to Pavlov, consisted of an unconditioned stimulus, food, and an unconditioned response, salivation. By an unconditioned stimulus, Pavlov meant an event or thing that elicits a response automatically or reflexively. ...read more.

For classical conditioning to be most effective, the stimulus to be conditioned should precede the unconditioned stimulus rather than follow it or occur at the same time. This makes sense, because in classical conditioning, the conditioned stimulus becomes a kind of signal for the unconditioned stimulus. It enables the organism to prepare for an event that is about to happen. In Pavlov's studies, for instance, a bell or a buzzer was a signal that meat was coming, and the dog's salivation was preparation for digestion food. If a dog can learn to salivate to the ringing of a bell, so can you. In fact, you probably have learned to salivate to the sound of a lunch bell, not to mention the phrase hot fudge sundae, "mouth-watering" pictures of food in magazines, and a voice calling out "Dinner's ready!" But the role of classical conditioning goes far beyond the learning of simple observable reflexes; conditioning affects us every day in many ways. ...read more.