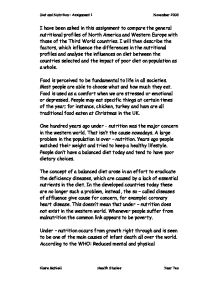 Compare the general nutritional profiles of North America and Western Europe with those of the Third World countries.

I have been asked in this assignment to compare the general nutritional profiles of North America and Western Europe with those of the Third World countries. I will then describe the factors, which influence the differences in the nutritional profiles and analyse the influences on diet between the countries selected and the impact of poor diet on population as a whole. Food is perceived to be fundamental to life in all societies. Most people are able to choose what and how much they eat. Food is used as a comfort when we are stressed or emotional or depressed. People may eat specific things at certain times of the year; for instance, chicken, turkey and ham are all traditional food eaten at Christmas in the UK. One hundred years ago under - nutrition was the major concern in the western world. That isn't the cause nowadays. A large problem in the population is over - nutrition. Years ago people watched their weight and tried to keep a healthy lifestyle. People don't have a balanced diet today and tend to have poor dietary choices. The concept of a balanced diet arose in an effort to eradicate the deficiency diseases, which are caused by a lack of essential nutrients in the diet. ...read more.

* Debt * Civil unrest Large numbers of the population in the developing world do not have enough food and consequently suffer from malnutrition. The populations of many of the developing countries have been rising faster than their production of food. A lack of education means that the people of the developing world do no practise effective birth control and consequently the population keeps increasing. The demand on food supply is therefore extremely high. According to the WHO: 'For every one farmer in the developed world there are 19 in the developing world. Where there is mechanization, fewer workers can produce more food.' The poorest people have not been educated and therefore don't know about pesticides and disease control on their crops. Malaria and sleeping sickness are endemic in undeveloped countries. These diseases leave the poor very ill and therefore they are unable to work on their land and consequently their family suffer from malnutrition for a period of time. There is an urgent need for an education programme of some sort to educate these people. Poor people are limited to the cheapest food such as rice and maize. These foods lack in the sufficient minerals and essential nutrients in which a person needs for a balanced diet. Those that depend on the cheapest foods tend to suffer from deficiency diseases. ...read more.

We also know that childhood obesity is a major public health issue in Northern Ireland.' Research carried out by the Health Promotion Agency shows that a third of boys and a quarter of girls aged 12 carry excess weight. Research also shows that obesity can impact a child's life on many levels. Obesity can present immediate and future health problems including high blood pressure, an increased risk of heart disease and diabetes. Overweight children are more likely to suffer from psychological problems such as depression, lack of self-esteem and self-confidence. Dr Brain Gaffney also said, 'There are many ways to combat this growing problem of obesity including providing children with a healthy, varied, balanced diet rich in fruit and veg both at school and at home as well as increasing physical activity levels both at school and outside school which will improve their overall health and well-being.' Researchers have identified that people who continue to watch their diet and exercise on a regular basis maintain their weight loss. However, for most people this may not seem realistic. It is important to remember that some small changes are better than no changes at all. These changes will go a long way to protect a person's health. People must be willing to seek help from healthcare professionals to find a treatment plan and set realistic behaviour goals. ...read more.