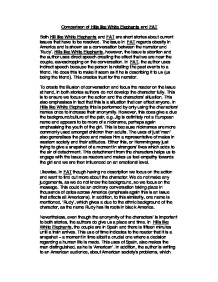 Comparison of Hills like White Elephants and FAT Both Hill like White Elephants and FAT are short stories about current issues that have to be resolved. The issue in FAT regards obesity in America and is shown as a conversation between the narrator and 'Rudy'. Hills like White Elephants, however, the issue is abortion and the author uses direct speech creating the effect that we are near the couple, eavesdropping on the conversation. In FAT, the author uses indirect speech because the person is retelling the past events to a friend. He does this to make it seem as if he is describing it to us (us being the friend). This creates trust for the narrator. To create the illusion of conversation and focus the reader on the issue at hand, in both stories authors do not develop the character fully. This is to ensure we focus on the action and the characters' situation. This also emphasises in fact that this is a situation that can effect anyone. In Hills like White Elephants this is performed by only using the characters' names once to increase their anonymity. However, this does give a clue the background/culture of the pair, e.g. ...read more.

In FAT, we are immediately made aware of the situation by the comical description of the 'fatty' who is 'the fattest man I've ever seen'. The repetition of 'fat' then keeps the issue fresh in our minds. In addition to this, the author describes the man's fingers as 'long, thick, creamy fingers'. The use of 'creamy' makes us think of something full of calories and fat like the man. On the other hand, Hills like White Elephants uses subtlety and the reader only begins to realise something is wrong when tension is built though interactions and until a point where the couple argue of a stupid matter of whether the man has seen a 'white elephant'. This further increases the awkwardness between the man and the girl, showing that something is building in both their minds, and that we are about to find out. This tension is maintained by the use of the only simile in the story about the girl believing there are 'Hills like White Elephants' in front of them, which is used to make the issue seem simplistic like the girls comment. Contrastingly, FAT uses many similes, to describe the man's 'long, thick, creamy fingers' and other matters relating to the issue of the man's obesity. ...read more.

This alienation, detachment and loneliness can be linked to the girl in Hills like White Elephants as she might as well be alone dining as the man is not listening to her or nurturing a relationship of any kind. At the end of the day, humans are social animals who like to feel part of a community and it is therefore striking when these characters are so obviously outcasts. However, the ending in FAT is very different to the ending in Hills like White Elephants. In Hills like White Elephants, the train comes and the couple leave, unlike in FAT where the narrator and Rudy get in bed and then as soon as Rudy 'gets on [her]' she feels 'terrifically fat'. We are not told why this is but we know '[her] life is going to change'. This is also shown by the mention of 'it is August', the change between summer and winter. Therefore, we can only assume that her outlook has changed as well as her prejudice. This makes the reader empathetic towards the fat man and we see that, like abortion, obesity is an issue that needs to be understood to be resolved. ...read more.