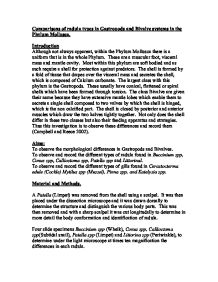 Comparisons of radula types in Gastropods and Bivalve systems in the Phylum Mollusca.

Comparisons of radula types in Gastropods and Bivalve systems in the Phylum Mollusca. Introduction Although not always apparent, within the Phylum Mollusca there is a uniform that is in the whole Phylum. These are a muscular foot, visceral mass and mantle cavity. Most within this phylum are soft bodied and as such require a shell for protection against predators. The shell is formed by a fold of tissue that drapes over the visceral mass and secretes the shell, which is composed of Calcium carbonate. The largest class with this phylum is the Gastropods. These usually have conical, flattened or spiral shells which have been formed through torsion. The class Bivalve are given their name because they have extensive mantle lobes which enable them to secrete a single shell composed to two valves by which the shell is hinged, which is the non calcified part. The shell is closed by posterior and anterior muscles which draw the two halves tightly together. Not only does the shell differ in these two classes but also their feeding apparatus and strategies. Thus this investigation is to observe these differences and record them (Campbell and Reece 2002). Aims: To observe the morphological differences in Gastropods and Bivalves. To observe and record the different types of radula found in Buccinium spp, Conus spp, Calliostoma spp, Patella spp and Littorinal. ...read more.

A Table A Comparison Gastropod Bivalve Distinct head V X Radula V X Modified Ctenidia X V Style sacs V V Suspension feeding X V Much difference was also seen in the frozen slides of three different gill types Filibranch Mytilus gill Fig. 10, Folded Filibranch ctenidium Pinna Fig. 11 and Katelysia Eulamelli branch gill Fig. 12. These differences may have been a result again of their feeding strategy and habitat type. Discussion. Comparisons could be made between the radula of the gastropods and the bivalve feeding systems. In the specimen gastropods, Buccinium the radula specimen slide showed very sharp points indicating that yes this species is a carnivore. Previous evidence has shown that they are indeed carnivores and they tend to feed on crabs and such like. Via mechano and chemo receptors they are able to detect food which they move towards using their muscular foot. The radula is extended from the buccal cavity and if he prey has a shell, the teeth of the radula drill a hole through the shell, almost like a zipper action to gain entry to the food source underneath. Again with the Callistoma spp radula which is also a carnivore it had sharp points on their radula. With regards to Patella spp and Littorina these species have been seen to be herbivores which can be detected by the formation of their radula. ...read more.

With regards to the mussel, they have large sheet like ctenidium with inhalant and exhalent siphons. The lateral cilia create water current which moves they water, and then the laterofrontal cilia capture food particles from the filtered water which has passed over the mucus covered gills. The frontal cilia transfer this captured food to the food groove which in turn transfers it to the mouth. It is the palps that are the final sorters of the food. They determine what should be ingested and what should be rejected, which is spat from the body in the form of psuedofaeces. Observations of the Pinna filibrancium gill which is folded showed that the ctenidia are highly modified. This may be to increase the surface area of the gill known as Plication. Other benefits that these species use is to expand or extract their gills in response to sediment and quality of their food (Roberts 2006). Katelysis Eulamelli branch gill showed comprised lamellabranch sheets of tissue again with laterofrontal, lateral and frontal cilia to aid the movement of the food particles. Conclusion. It can be seen from these observations that the feeding systems of gastropods and bivalves are very different even though they still retain their three main body parts. Evidence suggests they will be selected for their best survival (Feeding) and reproductive strategies and will continue to evolve along their separate branches. ...read more.