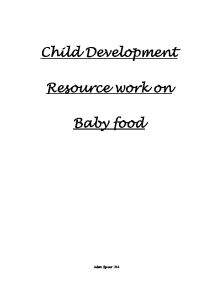 Copy and evaluate a commercial baby food with a homemade equivalent

Child Development Resource work on Baby food Centre num 12841 Candidate num:__________ Baby food test I chose to copy and evaluate a commercial baby food with a homemade equivalent. I am going to make a jar of baby food then comparing it with a commercial equivalent. I will try to make sure both have roughly the same ingredients. I will then make my bolognas and blend to the correct consistency so it is easy for the baby to eat. I will let people test it and give there opinion on the: 1. Texture 2. Colour 3. Convenience 4. Best flavour 5. Most appetising 6. Value for money I will then place the results I get on to a table then transfer it to a graph. Once I have done this I will weigh up the pros and cons of each one and give which one seems to be most like out off the two. I will do the coursework in steps they are: * Look at commercial baby foods and find one to compare with * List the ingredients and write a method to making it * Cost food * Make food and test with ten people * Write the results * Draw up a table * Draw graph * Evaluate my work I chose to copy the spaghetti bolognas made by Heinz with a price of 45p for a jar of 150 mls. ...read more.

Through my mistakes I made, I think that if I were to do this again I would try to remember to put more fluid into the mix so that it doesn't go really thick. I think that was a major mistake as it made the look and texture worse making this a slightly unfair test, as you didn't get the proper results it would of had if it was done correctly. If I were to do this resource work again the four things I would change would be: * Try to make the homemade baby food more appetising and less thick by making the mixture more watery. * I would try to research more in to the baby food ingredients. E.g. I would investigate how much salt can be in the baby foods. * Try to get the survey to a more wide range of ages as most of it was done in school so the survey was slightly unbalanced. If I done it again I would do this again I would do the survey on 12 people in these groups of twos in age groups. They would be toddlers, 2-5yrs, 5-10,10-18, 18-30, 30+. * Make it a fair test by not allowing the people to know which one was which as this may have coursed a different result then I got. I enjoyed the work and if I did have time I would have made these changes above to make it better and fairer. ?? ?? ?? ?? Adam Spicer 10.4 ...read more.