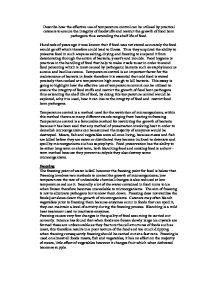 Describe how the effective use of temperature control can be utilised by practical caterers to ensure the integrity of foodstuffs and restrict the growth of food born pathogens thus extending the shelf life of food.

Describe how the effective use of temperature control can be utilised by practical caterers to ensure the integrity of foodstuffs and restrict the growth of food born pathogens thus extending the shelf life of food. Hundreds of years ago it was known that if food was not stored accurately the food would go off which therefore could lead to illness. Thus they acquired the ability to preserve food in such ways as salting, drying and freezing to suspend it from deteriorating through the action of bacteria, yeast's and moulds. Food hygiene is practices in the handling of food that help to make it safe to eat in order to avoid food poisoning which is most caused by pathogenic bacteria such as staphylococcus aureus and bacillus cereus. Temperature control is an important factor for the maintenance of bacteria in foods therefore it is essential that cold food is stored precisely then cooked at a temperature high enough to kill bacteria. ...read more.

Freezing does not sterilise the foods just slows down the growth of micororganisms. Caterers may often blanch vegetables prior to freezing them because enzymes occur in foods that can spoil it, they can maintain a level of activity during the freezing process. Blanching is a mild heat treatment used to inactivate enzymes. Freezing causes very few changes in the quality of food assuming its carried out correctly. Science has found that when foods are frozen slowly large ice crystals are formed these are unfavourable as they fracture the cell structures of foods such as meat, this therefore results in a poor texture of the food and too much dripping when thawing consequently freezing should be carried out at a fast rate. Freezing is used on almost all foods meats, fish and vegetables, it has no effect on the majority of meats, little effect of vegetables however it changes fruit which when defrosted becomes supple. ...read more.

The amount of heat required for sterilisation depends on factors such as the PH of the food. Foods with high acidity only require a mild heat because very few bacteria can survive within those conditions, whereas low acidic foods such as meat and fish require severe heat treatment to ensure total obliteration of bacteria such as Clostridium botulinum. General Caterers use low temperatures to preserve food based on research explaining that micro organisms can be slowed down above freezing and stopped at subfreezing because 'metabolic reactions of micro organisms are enzyme catalysed and that the rate of enzyme catalysed reactions is dependant on temperature. The temperature coefficient for most biological system is 1.5 to 2.5 so that for each 10oc rise in temperature within the suitable range, there is a twofold increase in the rate of reaction.' Microorganisms grow fast between the temperatures of 40� and 140�F (5� to 60�C). During the two-hour period in the DANGER ZONE, only minimal growth and reproduction can occur. One important rule of food safety is to stay out of the DANGER ZONE, where potentially hazardous foods support the growth of pathogenic microorganisms. ...read more.