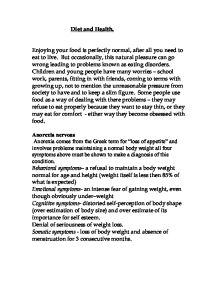 Diet and Health. Enjoying your food is perfectly normal, after all you need to eat to live. But occasionally, this natural pleasure can go wrong leading to problems known as eating disorders. Children and young people have many worries - school work, parents, fitting in with friends, coming to terms with growing up, not to mention the unreasonable pressure from society to have and to keep a slim figure. Some people use food as a way of dealing with there problems - they may refuse to eat properly because they want to stay thin, or they may eat for comfort - either way they become obsessed with food. Anorexia nervosa Anorexia comes from the Greek term for "loss of appetite" and involves problems maintaining a normal body weight all four symptoms above must be shown to make a diagnosis of this condition. Behavioral symptoms- a refusal to maintain a body weight normal for age and height (weight itself is less then 85% of what is expected) Emotional symptoms- an intense fear of gaining weight, even though obviously under-weight Cognitive symptoms- distorted self-perception of body shape (over estimation of body size) and over estimate of its importance for self esteem. Denial of seriousness of weight loss. Somatic symptoms - loss of body weight and absence of menstruation for 3 consecutive months. ...read more.

Some festive occasions are not based on religious laws, but have ritual importance and food has an important part to plat for example the New Year, Halloween and bonfire night. Certain religions have special laws or instructions about the way that food is prepared and about what should and should not be eaten. Many religious beliefs are associated with food some of which are Jewish, Moslem, Hindu and Christian belief. Jewish culture - foods fulfilling the requirements of Jewish law are called kosher foods. Only meat from cud-chewing, clove-footed animals may be eaten e.g. lamb, venison and beef and clean birds (birds of pray and scavenger birds may not be eaten). Forbidden foods in the Jewish culture also include pig meat of any kind, eggs with blood spots, gelatine, shellfish, and eels. Certain foods should not be prepared and eaten together such as milk and meat. Muslim culture - forbidden food, many Muslims follow similar food laws as those practiced in the Jewish culture e.g. they do not eat pig. Food allowed to eat, animals killed during ritual slaughter are allowed to be eaten a certain amount of fish is eaten by some Muslims. Hindu culture - forbidden foods, any meat from cows and pigs, which are considered as unclean. ...read more.

water instead of sugary drinks > Use les jam and marmalade How to eat more fibre > Eat more fruit and vegetables > Eat more pulses - peas, beans and lentils > Eat more brown bread and rice instead of the white varieties > Choose whole grain breakfast cereal, e.g. weetabix, bran flakes, shredded wheat The balance of good health The balance of good health can help people understand and enjoy healthy living. It shows the types and proportions of food recommendations for a well-balanced and healthy diet. The different areas occupied by each of the different food groups show this. It's not necessary to achieve the balance shown at every meal, or even every day, although this would helps to ensure that the overall diet is well balanced. It is important to choose a variety of foods from the first four groups every day in order to get the wide range of nutrients the body needs to remain healthy and function properly. Choosing different foods from within each group adds to the range of nutrients consumed. Foods in the fifth group are fatty and sugary foods which are not essential to a healthy diet but add extra choice and enjoyment. We should try not to eat these foods to often, and only in small amounts when we do eat them. ...read more.