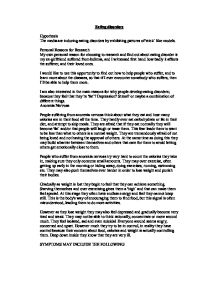 Eating disorders Hypothesis The media are inducing eating disorders by exhibiting pictures of 'stick� like models. Personal Reasons for Research My own personal reason for choosing to research and find out about eating disorder is my ex-girlfriend suffered from bulimia, and I witnessed first hand how badly it affects the sufferer, and their loved ones. I would like to use this opportunity to find out how to help people who suffer, and to learn more about the diseases, so that if I ever encounter somebody who suffers, then I�ll be able to help them more. I am also interested in the main reasons for why people develop eating disorders; because they feel that they�re 'fat�? Depression? Stress? or maybe a combination of different things. Anorexia Nervosa People suffering from anorexia nervosa think about what they eat and how many calories are in their food all the time. They hardly ever eat carbohydrate or fat in their diet, and attempt to skip meals. They are afraid that if they eat normally they will become 'fat� and/or that people will laugh or tease them. This fear leads them to want to be less than what to others is a normal weight. They are tremendously afraid of not being loved and not having the approval of others. At the same time as doing this they may build a barrier between themselves and others that care for them to avoid letting others get emotionally close to them. ...read more.

It is estimated that approximately 5-10% of people with eating disorders are male. Despite greater media interest and public awareness of anorexia and bulimia over recent years and its recognition as a serious health problem, a considerable number of men with eating disorders still remain unknown to the medical profession, self-help groups and other support structures. This is partly due to the reluctance of people with eating disorders to seek help, together with a strong denial that anything may be wrong. In addition, many health professionals do not consider anorexia nervosa a possible diagnosis in males and are surprised about the existence of men with eating disorders. Boys as young as eleven or twelve may become anorexic, though the disorder is one to which women are a lot more vulnerable. Marilyn Lawrence of the Women�s Therapy Centre describes this well. She writes: "Anorexia is a problem crucially related to women�s psychology which in turn is related to women�s way of being in the world. The fact that it sometimes affects men only indicates that the psychology of women and men is not wholly distinct: issues problematic for most women can also be so for men." Dieting The Psychology Very many people take part in dieting. Health professionals could be forgiven for assuming that reducing diets are for 'fat� people. However, this is far from the case. Up to one third of men and women in the western world are said to be overweight. ...read more.

Statistics from Edreferral.com, US, shows that:- � 80% of American women are dissatisfied with their appearance. � 42% of 1st-3rd grade girls want to be thinner. � 81% of 10 year olds are afraid of being fat � The average woman is 5�4" tall and weighs 140 lbs. The average American model is 5�11" tall and weighs 117 lbs. � Most fashion models are thinner than 98% of American women. � 51% of 9 and 10 year old girls feel better about themselves if they are on a diet. � 46% of 9-11 year olds are "sometimes" or "very often" on diets. � 91% of women on a college campus had attempted to control their weight through dieting. � 35% of "normal dieters" progress to pathological dieting. Of those 20-25% progress to partial or full-syndrome eating disorders. � 25% of American men and 45% of American women are on a diet on any given day. � Americans spend over $50 billion (�33.34 billion) on dieting and diet-related products each year. Some of these statistics are very "scary", especially those where it is children of 7-11 years are taking part in diets. Another of the more shocking statistics is that although models are on average 7 ins taller than the average American women, hoe they can be on average 23 lbs lighter. Several thing could make these people want to diet the way that they do, and in this project I will hopefully uncover some of these reasons, and hopefully find some way of helping to cut down on the number of people who have eating disorders. ...read more.