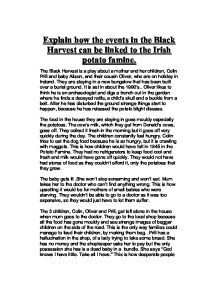 Explain how the events in the Black Harvest can be linked to the Irish potato famine.

Explain how the events in the Black Harvest can be linked to the Irish potato famine. The Black Harvest is a play about a mother and her children, Colin Prill and baby Alison, and their cousin Oliver, who are on holiday in Ireland. They are staying in a new bungalow that has been built over a burial ground. It is set in about the 1990's.. Oliver likes to think he is an archaeologist and digs a trench out in the garden where he finds a decayed rattle, a child's skull and a buckle from a belt. After he has disturbed the ground strange things start to happen, because he has released the potato blight disease. ...read more.

This is how upsetting it would be for mothers of small babies who were starving. They wouldn't be able to go to a doctor as it was too expensive, so they would just have to let them suffer. The 3 children, Colin, Oliver and Prill, get left alone in the house when mum goes to the doctor. They go to the local shop because all the food has gone mouldy and see strange images of beggar children on the side of the road. This is the only way families could manage to feed their children, by making them beg. .Prill has a hallucination in the shop, of a lady trying to take some bread. ...read more.

They smell and have beetles crawling on them. This is what the potato farmers would have found when they tried to harvest them. It will cost Donald a lot of money as he won't be able to sell the potatoes but for the farmers in 1845 they would not have had any alternative ways of making money and would be financially ruined. As well as this they would starve as there was no chance to buy food elsewhere, at least Donlad could have the choice to eat other food. The play reflects real life situations that the people of Ireland would have encountered in the Potato Famine. It compares with children's lives nowadays, and how disgusted we would be if we had mouldy food and had to go hungry. It also shows how upsetting it would be for parents seeing their children suffer. ...read more.