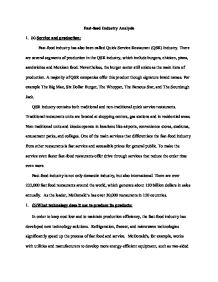 Fast-food Industry Analysis 1. (a) Service and production: Fast-food industry has also been called Quick Service Restaurant (QSR) Industry. There are several segments of production in the QSR industry, which include burgers, chicken, pizza, sandwiches and Mexican food. Nevertheless, the burger sector still exists as the main item of production. A majority of QSR companies offer this product though signature brand names. For example The Big Mac, Six Dollar Burger, The Whopper, The Famous Star, and The Sourdough Jack. QSR industry contains both traditional and non-traditional quick service restaurants. Traditional restaurants units are located at shopping centers, gas stations and in residential areas. Non-traditional units and kiosks operate in locations like airports, convenience stores, stadiums, amusement parks, and colleges. One of the main services that differentiate the fast-food industry from other restaurants is fast service and accessible prices for general public. To make the service even faster fast-food restaurants offer drive through services that reduce the order time even more. Fast-food industry is not only domestic industry, but also international. There are over 222,000 fast food restaurants around the world, which generate about 130 billion dollars in sales annually. As the leader, McDonald's has over 30,000 restaurants in 120 countries. 1. (b)What technology does it use to produce its products: In order to keep cost low and to maintain production efficiency, the fast-food industry has developed new technology solutions. Refrigeration, freezer, and microwave technologies significantly speed up the process of fast food and service. McDonald's, for example, works with utilities and manufacturers to develop more energy-efficient equipment, such as two-sided grills for cooking hamburgers and more-efficient fryers. In addition, they use state-of-the-art heating, ventilation, and air conditioning (HVAC) ...read more.

Health issue is one of the most important issues in restaurant industry and especially in fast-food industry. It is an easy task to control the quality of ingredients and the way the food is prepared in one restaurant. But when we talk about fast food we have to keep in mind that there are tens thousand restaurants across USA. Part of them operated by the company and part of them are franchised. Those restaurants are located in all states, which creates even greater task for health control. Most of the regulations are the same in all states, at least the government regulations. But each end every state can add the regulations of his own. Here comes the real problem for the fast food industry, they have to provide restaurants in different states with regulatory updates in order to keep up with regulation differences. It is not an easy task taking into account that most of big cities has their own regulations in addition to the state and government. I think that one of the best examples to illustrate the effect of those regulations is Jack In The Box case of mass poisoning in 1992 in Washington State. Had the company in 1992 followed state regulations, which mandate that hamburgers be cooked to an internal temperature of 155 degrees, the epidemic would have been prevented, health experts say. State officials say a state law superseded a federal guideline at the time of 140 degrees. Three children died and about 600 got injured as a result of poisoning (work cited). Company paid tens millions of dollars in court settlements and efforts to recover from the damage its image. Today Jack In The Box is one of the industry leaders in monitoring of the food quality from suppliers to the customers. It took years to recover from the damage. ...read more.