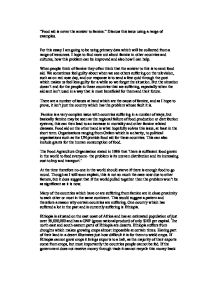 &quot;Food aid is never the answer to famine.&quot; Discuss this issue using a range of examples.

"Food aid is never the answer to famine." Discuss this issue using a range of examples. For this essay I am going to be using primary data which will be collected from a range of resources. I hope to find more out about famine in other countries and cultures, how this problem can be improved and also how I can help. When people think of famine they often think that the answer to this is to send food aid. We sometimes feel guilty about when we see others suffering on the television, such as on red nose day, and our response is to send a few quid through the post which makes us feel less guilty for a while so we forget the situation. But the situation doesn't end for the people in these countries that are suffering, especially when the aid sent isn't used in a way that is most beneficial for them and their future. There are a number of issues at hand which are the cause of famine, and as I hope to prove, it isn't just the country which has the problem whose fault it is. Famine is a very complex issue with countries suffering in a number of ways, but basically famine may be seen as the regional failure of food production or distribution systems, this can then lead to an increase in mortality and other famine related diseases. ...read more.

The Organisation for Economic Co-operation and Development (OECD) and the European Union (EU) have suggested of improving infrastructure so more people get the aid they need. Food could then be stored correctly and transported to any location in need. The western governments were criticized for the way in which they handled this crisis, and their reluctance at first to do anything at first. However, there are examples of different methods used by the UN. In 1982 the Turkana nomadic people of Kenya suffered their livestock being wiped out. At first only food aid for them was provided for the people but there was a new scheme introduced which although did not fully help as was hopeful, if this scheme was managed slightly better it would have had more of an affect. This was called 'food for work', under this system manual labour is remunerated with set quantities of food on a piece-work basis. The problem was that the system was not properly thought out. New concepts which were completely new to the nomadic farmers and little effort was made by them as they did not believe that it would help them, they were right. The work set for them did not benefit them. Another problem was that opportunists were taking the work, who weren't even farmers. Though this wasn't a major problem it does prove that although well-intentioned, this 'food for work' system did not work properly. ...read more.

The country can then prosper in the world market. However when providing for the long term solutions, if the country is to be improved we must also think of aid that is appropriate for that country. An example of bad food aid is where tractors were sent. This country had no way of improving the situation by using those tractors. Long term aid must therefore be beneficial to the country which will hopefully mean they can stand on their own two feet. The OECD and the EU have also suggested that the way forward for country who finds it hard to feed all their people is to improve the infrastructure in the country. If effective storage and transport of the crops can be made then this will help the country greatly. This is particularly important for large, land-locked countries such as Ethiopia. It means that all of the population can be feed instead of just the ones near where the food is grown. To tackle this, the decentralisation of where food is produced needs to be made so the food isn't just grown in one area. If the poor get poorer then they may never get out of the situation. We must make them realise that it won't work if the western world has to bail them out all the time, and that the only way that famine is going to be eradicated is if these countries are able to support themselves without too much intervention from other countries. ...read more.