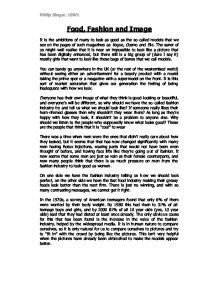 Food, Fashion and Image It is the ambitions of many to look as good as the so-called models that we see on the pages of such magazines as Vogue, Cosmo and Elle. The saner of us might well realise that it is near on impossible to look like a picture that has been digitally enhanced, but there still is a big group of (dare I say it) mostly girls that want to look like these bags of bones that we call models. You can barely go anywhere in the UK (or the rest of the westernised world) without seeing either an advertisement for a beauty product with a model taking the prime spot or a magazine with a supermodel on the front. It is this sort of market saturation that gives our generation the feeling of being inadequate with how we look. ...read more.

On one side we have the fashion industry telling us how we should look perfect, on the other side we have the fast food industry making their greasy foods look better than the next firm. There is just no winning, and with so many contrasting messages, we cannot get it right. In the 1970s, a survey of American teenagers found that only 6% of them were worried by their body weight. By 1980 this had risen to 31% of all teenage boys and girls, and by 2000 81% of all 10 year olds (yes, 10 year olds) said that they had dieted at least once already. The only obvious cause for this that has been found is the increase in the voice of the fashion industry, helped by the widespread media. It is in human nature to compare ourselves, so it is only natural for us to compare ourselves to pictures and try to "fit in" with the crowd by being like the pictures. ...read more.

It is persuading the population to eat its fatty, greasy foods that is creating the exact opposite of the fashion industry - it is creating another group of people that are grossly overweight and so we are faced with lots of obvious contradictions - the Fashion industry saying "be thin - it's healthy" and the Fast food industry saying "eat the foods you want - they're tasty". No wonder so many people are developing food disorders. I think that as long as everyone is sensible, and eats a balanced diet with not too much of anything, we should all be fit and healthy. Just as long as we don't all eat chocolate and play computer games all day, we should all be much the same, some people being bigger than others, some being spotty, some sporty. If we were all the same, all girls wearing the same, being the same weight, and all boys enjoying the same things that our friends do, life would be very boring. Philip Singer, 10W1 ...read more.