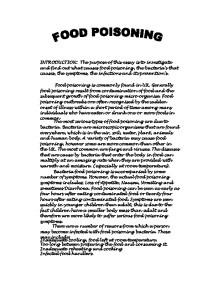 INTRODUCTION: The purpose of this essay is to investigate and find out what causes food poisoning, the bacteria's that causes, the symptoms, the infections and its prevention's. Food poisoning is commonly found in UK. Generally food poisoning result from contamination of food and the subsequent growth of food poisoning micro-organise. Food poisoning outbreaks ore often recognised by the sudden onset of illness within a short period of time among many individuals who have eaten or drunk one or more foods in common The most serious types of food poisoning are due to bacteria. Bacteria are microscopic organisms that are found everywhere, which is in the air, soil, water, plant, animals and human body. ...read more.

Using suitable preservatives such as salting and refrigerating. Not allowing dried foods to absorb moisture. Keeping food safe is the first step to a better health. The intension of food safety is to prevent food poisoning and to maintain the wholesomeness of the food product through all stages of processing until it is finally eaten. The most common symptoms are loss of appetite, vomiting & diarrhoea which may be a life threatening to elderly, sick, infants and those people with weaker immune systems. Sources of infection include inadequate storing and improper cleaning of utensils and equipment and a number of measures such as using clean utensils and storing foods at the right place and time should be adopted to reduce the risk of infections. BIBLOGRAPHY http://www.clearleadinc.com/site/food_poisoning.html ...read more.