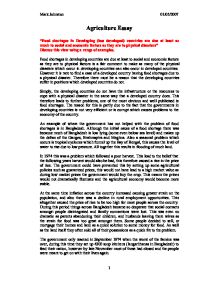 &quot;Food shortages in Developing (less developed) countries are due at least as much to social and economic factors as they are to physical disasters&quot; Discuss this view using a range of examples.

For example in Britain if people want a product or a service they pay for it with money, this is not always the case in developing countries as many 'products' or services are paid for with other products or services. This was a big problem in Sudan around 1991-2 where the price of food was on the increase due to poor harvests causing a lack of food. One of the main products which suffered this problem was flour. At the same time the nomadic herdsmen which rely on the price they can get for their livestock had a problem because the price that they could get for livestock dropped. This meant that they could not raise enough money to afford food. In a similar way to the government in Bangladesh, the government of Sudan did not respond in the correct way to suit this situation which affected over 1,000,000 people. Although they did request 75,000 tons of aid, they did so only suggesting it would plug its 'food gap'. However the situation in Sudan was obviously more than a food gap, and the government were either denying their situation and trying to cover it up, or they genuinely were too oblivious to the situation to realise the seriousness of it. ...read more.

This problem in places such as Ethiopia and Bangladesh is not going to get any easy in the future when much of their land is used for agriculture as much of the soil is now being overgrazed and many of the nutrients are slowly being used up from the soil as it is not left fallow as perhaps it should be. This has already led to soil erosion and desertification in many parts and no doubt this will occur in more areas if something is not done sooner. Also with global warming there is likely to be more droughts and higher sea levels causing more flooding in Bangladesh, therefore the governments of these countries and others in similar positions should act sooner to prevent more catastrophic events from occurring. In conclusion to this I believe that if the governments are set up in a way that will act quickly and have the resources to act in a responsive manner to solving the problem, there will not be a problem of famine, even if there is food shortages one year. Therefore in response to the comment which this essay is set around I agree that it is as much down to the social and economic issues, as it is down to a physical disaster that causes food shortages in a country. Mark Johnston 01/05/2007 1 ...read more.