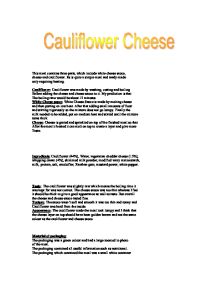 This meal contains three parts, which include white cheese sauce, cheese and cauliflower. Its is quite a simple meal and ready-made only requiring heating. Cauliflower: Cauliflower was made by washing, cutting and boiling Before adding the cheese and cheese sauce to it. My prediction is that The boiling time would be about 15 minutes. White Cheese sauce: White Cheese Sauce is made by melting cheese and then putting on low heat. After that adding small amounts of flour and stirring vigorously so the mixture does not go lumpy. Finally the milk needed to be added, put on medium heat and stirred until the mixture turns thick. ...read more.