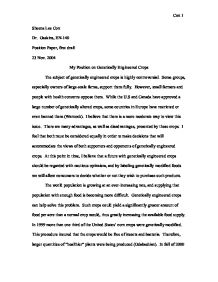 Sheena Lee Cox Dr. Gaskins, EN-140 Position Paper, first draft 23 Nov. 2004 My Position on Genetically Engineered Crops The subject of genetically engineered crops is highly controversial. Some groups, especially owners of large-scale farms, support them fully. However, small farmers and people with health concerns oppose them. While the U.S and Canada have approved a large number of genetically altered crops, some countries in Europe have restricted or even banned them (Warnock). I believe that there is a more moderate way to view this issue. There are many advantages, as well as disadvantages, presented by these crops. I feel that both must be considered equally in order to make decisions that will accommodate the views of both supporters and opponents of genetically engineered crops. At this point in time, I believe that a future with genetically engineered crops should be regarded with cautious optimism, and by labeling genetically modified foods we will allow consumers to decide whether or not they wish to purchase such products. The world population is growing at an ever-increasing rate, and supplying that population with enough food is becoming more difficult. Genetically engineered crops can help solve this problem. Such crops could yield a significantly greater amount of food per acre than a normal crop would, thus greatly increasing the available food supply. In 1999 more than one third of the United States' corn crops were genetically modified. ...read more.

This can greatly increase the risk of allergies into plants. For example, in 1996 the Brazil-nut gene was inserted into soybean plants to improve their content for animal feed. This proved to be a nearly fatal combination for people who were allergic to Brazil-nuts (Bakshi). Studies have shown that genetically altered plant have lower concentrations of phytoestrogen compounds, which protect against cancer and heart diseases. This may indicate that genetically engineered foods have less nutritional value. One example of this is in cow milk. When cows are injected with gamma bovine growth hormone (rBGH) higher levels of fat and bacteria are present in the milk, thus causing it to spoil faster. This can alter the cellular metabolism of the cow. Therefore, stopping its ability to make important vitamins and nutrients, which are normally synthesized naturally in non-genetically engineered foods. In my opinion, both of these points can be tackled by placing strict government regulations on the quality and safety of genetically engineered crops. Agencies such as the United States Department of Agriculture (USDA) and the Food and Drug Administration (FDA) exist for exactly this purpose; to guarantee the safety of the foods we consume (Jaffe). Genetically modified foods should be tested and proven safe, just like any other product that is placed on the market in today's society. For example, cars must be inspected to ensure they are safe to drive. ...read more.

In January of 2000, one hundred and thirty countries adopted the Biosafety Protocol, which requires that genetically modified foods be labeled by exporters (Odabashian). However, the problem is that the United States doesn't require that genetically modified foods be labeled if they are not exported or imported. Large corporations are controlling the labeling of genetically modified foods because they are afraid that their sales will decrease if they are forced to label such products. However, the National Opinion Poll says different. During a poll taken in 2001, 44% of consumers said that they would buy foods that were labeled as genetically engineered, while only 18% stated that they wouldn't and 38% percent said they did not care one way or the other (Bruskin Research). Large corporations shouldn't be worried if their products are truly 100% safe. In conclusion, I think it is too soon to reach a final verdict on genetically engineered crops. Food production is arguably the most important industry in the world. Without enough food to support the population, our society would crumble into chaos brought on by famine. However, it is unthinkable to allow farms to produce food that is potentially harmful to consumers. At this point, there is simply not enough information to completely support or oppose the growth of genetically altered plants to be used as food. Until more is known about the positive and negative impact of such plants on consumers, the environment, and the economy, it is safest to label genetically modified foods in order to allow the consumer to decide and to be cautiously open-minded towards the issue. ...read more.