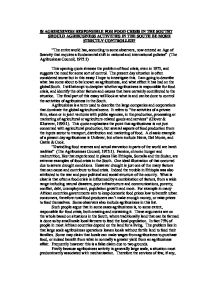 Is Agribusiness Responsible For Food Crisis In the South?

IS AGRIBUSINESS RESPONSIBLE FOR FOOD CRISIS IN THE SOUTH? SHOULD AGRIBUSINESS ACTIVITIES IN THE SOUTH BE MORE STRICTLY CONTROLLED? "The entire world has, according to some observers, now entered an Age of Scarcity that requires a fundamental shift in national and international policies" (The Agribusiness Council, 1975:1) This opening quote stresses the problem of food crisis, even in 1975, and suggests the need for some sort of control. The present day situation is often considered worse but in this essay I hope to investigate this. I am going to describe what has come about to be known as agribusiness, and what effect it has had on the global South. I will attempt to decipher whether agribusiness is responsible for food crisis, and identify the other factors and causes that have certainly contributed to the situation. The final part of this essay will look at what is and can be done to control the activities of agribusiness in the South. Agribusiness is a term used to describe the large companies and corporations that dominate the global agricultural scene. It refers to "the activities of a private firm, alone or in joint ventures with public agencies, in the production, processing or marketing of agricultural or agriculture-related goods and services" (Glover & Klusterer, 1990:1). This quote emphasises the point that agribusiness is not just concerned with agricultural production, but several aspects of food production from the inputs sector to transport, distribution and marketing of food. ...read more.

This of course renders the newley unemployed without means to purchase food, particularly that produced by the agribusiness as it tends to be expensive, due to the high cost of inputs (such as machinery and chemical fertilisers and pesticides). Secondly because agribusinesses have tended toward cash crop production ie. foods produced for export. "Scarce resources are diverted to meet the needs of affluent consumers in cities or developed countries, leaving unsatisfied demands for basic food crops" (Glover & Kusterer, 1990:17). This, of course, means that the food is generally not suited for local consumption anyway. In defence it can be said that the revenue made on exporting these goods does provide an income to the area. In fact cash crops are vitally important in Africa. At least twelve countries are dependant on just one main crop for over 70% of their income. Despite their primary aim of making profits (not feeding the hungry), agribusinesses generally assume that the poor will be earning sufficient income to purchase food. Yet such assumptions do not take into consideration that the poor are left dependant on market and commodity prices, that characteristically can change significantly and price such social groups out of the market. Also in their book 'Agribusiness in Africa', Dinham and Hines point out that "the purchasing power provided by agricultural exports rarely keeps pace with the price of the manufactured products which Africa imports" (1984:11). ...read more.

Kinsey supports agribusiness operations on a small to medium scale, as such schemes tend to be labour intensive, and therefore provide ample employment for locals. I do think that agribusiness in the South should be more strictly controlled, purely and simply because of its ability to trigger and sustain food crisis. Suitable controls could ensure agribusiness only has a positive effect on food crisis in the South. The way in which they are controlled however, is difficult to decide. Firstly because of all the 'red tape' surrounding not only the businesses but countries in the South too. Also there is a sensitivity issue, some countries reject interference and the agribusinesses are unlikely to appreciate being told how to function. Either a subtle approach needs to be taken or a severe change in national and international policy is required to ensure that agribusiness is regulated in a suitable manner so as to prevent food crisis. In all other aspects I think agribusiness should be encouraged to continue where it is benefiting the people hosting them. In conclusion I would agree that in some situations, certainly on a large scale, agribusiness can be responsible for food crisis, but in others it can help alleviate them. It should be remembered that there are many things that trigger a food crisis and it is often not as simple as one factor being responsible. Where agribusiness is responsible for food crisis, steps should be taken to control their activities, but where it can be used or manipulated to relieve a crisis it should be encouraged. ...read more.