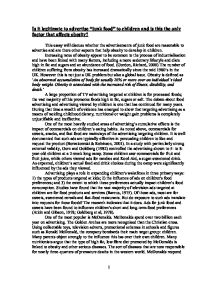 Is it legitimate to advertise &quot;junk food&quot; to children and is this the only factor that affects obesity?

Is it legitimate to advertise "junk food" to children and is this the only factor that affects obesity? This essay will discuss whether the advertisements of junk food are reasonable to advertise and are there other aspects that help obesity to develop in children. Increasing rates of obesity appear to be common to the process of industrialisation and have been linked with many factors, including a more sedentary lifestyle and diets high in fat and sugars and an abundance of food. (Gordon, Richard, 2000) The number of children suffering from obesity has increased dramatically since the mid 1980's in the UK. However this is not just a UK problem but also a global issue. Obesity is defined as 'An abnormal accumulation of body fat usually 20% or more over an individual's ideal body weight. Obesity is associated with the increased risk of illness, disability, and death.' A large proportion of TV advertising targeted at children is for processed foods; the vast majority of this promotes foods high in fat, sugars or salt. The debate about food advertising and advertising viewed by children is one that has continued for many years. During that time a wealth of evidence has emerged to show that targeting advertising as a means of tackling childhood dietary, nutritional or weight gain problems is completely unjustifiable and ineffective. One of the most heavily studied areas of advertising's cumulative effects is the impact of commercials on children's eating habits. As noted above, commercials for sweets, snacks, and fast food are mainstays of the advertising targeting children. It is well documented that such ads are typically effective in persuading children to like and request the product (Borzekowski & Robinson, 2001). ...read more.

This study countered many direct advertising/food linkage assumptions, and suggested that there was then no evidence that advertising is the principal influence on children's eating behaviours. In addition, this study showed that there was no serious or methodologically sound evidence that shows that food advertising led to an increase in the consumption by children of whole categories of food (i.e. fast food). Proponents of a direct link between exposures to food related imagery and obesity have distorted the debate by focussing on the impact of advertising without taking into account the impact of the television program environment. Kaufman (1980) provides a more balanced approach with her content analysis of American television advertising within the programme context. She found that commercial references to fruit and vegetables outweighed programme references to these food types by more than 3 to 1. Further, she found that 64% of non-nutritious foods were represented in programme content rather than in commercials, while 62% of nutritious foods were represented in commercials. In addition, she highlights that television characters rarely ate balanced meals but rather snacked between meals, portraying both food choice and eating behaviour associated in real life with problems of weight control and nutrition - yet television characters are rarely depicted as obese. There may well be some validity in this observation as Irving and Berel (2001) suggest that exposure to medias that promote a thin ideal of beauty may be associated not with overeating and obesity, but with the opposite extreme - eating disorders. It should be noted that the Kaufman study is now over two decades old and a replication / extension of the study could prove invaluable. ...read more.

Thus, children can be persuaded not to regulate energy intakes. Given this, the strongly criticized promotion by fast food chains of large portions (Kucharsky, 2002) would appear to be contributing to excessive calorie intake in some children. An aspect usually neglected in this debate is the influence of peer pressure on children. Cioletti (2001) points to the importance of social interaction and peer approval for children. It is also said that advertising incites children to pester their parents. Such pestering, however, appears to occur whether there is advertising or not. It is highly misleading to ascribe this time-honoured characteristic of the parent-child relationship to advertisements. Chips are the most requested food type yet the amount of advertising for them is extremely modest (and actually only for a "low fat" brand) but in our modern society children are increasingly involved in family purchasing decisions, and so they should be. Therefore Children are consumers; they have noticeable sums of pocket money and have preferences like everyone else. While there are a variety of limits on their choices, not least economic, the assumptions that they are incapable of making informed choices and, in this context, are being manipulated by advertising is a patronising form of scaremongering; it deliberately overstates and misrepresents the potency and role of advertising. REFRENCES Anonymous (2002), Maternal feeding practices are linked to childhood obesity" Obesity, Fitness and Wellness Week, April 6, 3. Atkin, C., & Heald, G. (1977). The content of children's toy and food commercials. Journal of Communication, 27 (1), 107-114 Avery, R.J., Mathios, A., Shanahan, J. and Bisogni, C. (1997),"Food and nutrition messages communicated through prime-time television", Journal of Public Policy and Marketing, 16 (2), 217 - 227. Borzekowski, D. L. G., & Robinson, T. N. (2001). ...read more.