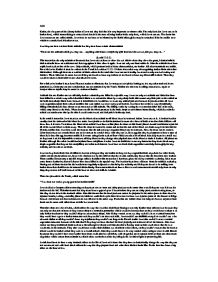 AO2 Kashrut is a key part of the dietary habits of Jews and they feel that it is very important to observe this. The only food that Jews can eat is kosher food, which means fitting or correct food that is in the state of being kosher is the only food, which Jews can eat. The foods that Jews cannot eat are called triefah. Jews food do not have to be blessed by the Rabbi although he may be consulted if the is conflict as to whether a certain food is kosher or not. Jews may eat meat eat food from animals but they must have certain characteristics "These are the animals which you may eat... anything which has a completely split hoof and chews cud, this you may eat..." (Leviticus 11:2-3) This means that the only animals or livestock that Jews can eat have to chew the cud this is where they chew the grass, it forms balls in their stomachs know as ruminants and then regurgitate it then chew it again. Jews can only eat these animals. Also the animals must have a split hoof such as that of the cow. Only animals, which possess both of these characteristics, are kosher .All other mammals are treifah. For a bird to be Kosher it must be written in the Torah in Leviticus 11:13-19 there is no other way of recognising kosher birds other than this method. ...read more.

Then the meat is covered in coarse salt so that the rest of the blood can drain away it is then left for 60 minutes like this. Jews then wash the meat so that the salt and any congealed blood can be removed. Now the meat can be cooked. Other foods must not contain blood and so Jews must be careful about what they eat i.e. if an egg that they buy happens to have a spot of blood in it then this egg becomes treifah if Jews are eating foods such as liver which contain a lot of blood then they must be careful and so they roast it as it is impossible to remove all they blood so they change thee physical state of the blood to make it kosher. All plants are Kosher although like other Jewish foods plants have complicated rules. Jews are forbidden to eat any insects so they must check every single vegetable that they eat for caterpillars, and other such insects. Jews have to check their vegetables extremely thoroughly for any animals, as it is a sin to eat them. Jews can buy foods from lots of different sources as long as they are kosher so they can buy vegetables from anywhere but other foods, which contain preservatives etc, have to be checked out by the rabbi so that the Jewish community knows that the food is in fact kosher. ...read more.

Jews couldn't eat shellfish or squid so couldn't eat a lot of exotic dishes at all they couldn't have any reptiles so they couldn't eat frog or the French snails. Jews also couldn't eat at a normal vegetarian restaurant because of the risk that S they may not have checked the food properly and removed all of the insects. Also Jews cannot eat many traditional meals such as a cheeseburger or cheese and biscuits after a Sunday roast as this would mean that the two would mix in the stomach. They also would have to take their children out of school to feed them, as they couldn't ensure that the food at school would be kosher unless they went to a Jewish school. Also they would have to be very careful when eating at none Jewish friends houses as they couldn't have none kosher food there could also be a problem, with drugs that are in capsule form as these are often made of gelatine which comes from animals but this is often overlooked as the key thing in the Jewish religion is preserving life. Jewish food laws do have a very dramatic affect on the life of Jews as it mean that they have to dramatically change the way that they eat and act around and with food also it affects the way that they prepare food and what there kitchen looks like. So the food law have a big affect on the lives of Jew ...read more.