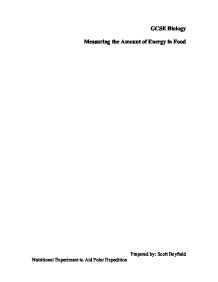 Measuring the Amount of Energy in Food.

GCSE Biology Measuring the Amount of Energy in Food Prepared by: Scott Bayfield Nutritional Experiment to Aid Polar Expedition Contents Planning Page 3 Expected results Page 3 Equipment list Page 4 Health and safety issues Page 4 Variables Page 4 Method Page 4 Results Page 5 Analysis Page 7 Test Evaluation Page 8 Planning The objective of this experiment is to evaluate the energy that can be gained from certain food types, (namely peanuts and spaghetti) and calculate which of these foods is most suited as a core dietary item during a polar expedition. In addition to the nutritional benefits, consideration must also be made in respect of the equipment required for cooking the food as well as the foods cooking time and weight. To measure the chemical energy produced by each food type, the food is burned and the heat produced by the flame is used to increase the temperature of water held in a test tube directly above the fire. The increase in temperature is then converted into a measurement of energy (kilojoules). Expected result Preliminary predictions can be made based on what we already know about the nutritional values of the two food types. They are as follows: (Nutritional information) Peanut Spaghetti Fat 53g Fat 2g Carbohydrates 7g Carbohydrates 69g Protein 28g Protein 13g Fibre 6g Fibre 4g Sodium 0.4g Sodium Trace As spaghetti is a food consisting of mostly carbohydrates, I would expect it to burn quite quickly, thus producing a very small amount of energy. ...read more.

Had the experiment been conducted in a sealed unit the food could have been ignited in a position directly under the water thus reducing the amount of lost energy. * The test tube should have been insulated so heat could not escape through its walls and so the room temperature could not effect the temperature of the water. * The top of the test tube was too large, which again allows for heat loss in the air and exposes the water to outside elements. If I were conducting the experiment again, I would use a glass container with a thin walled flat base in preference to the test tube. This would allow the flame to burn evenly across the base, thus reducing the amount of energy lost in the air. The food would also be held in a secure position with the use of an additional clamp and stand. This will prevent the movement of the flame throughout the experiment and will ensure it remains the same distance from the cylinder. The human body gives better output when supplied with a good balance of nutrients. In an ideal world both food sources would be made available to the explorers to allow them to take benefit from each of the foods attributes. To extend this experiment I would look into the suitability of a wider variety of food types. This would involve conducting the same tests in an effort to determine what other foods offer equal or better qualities for an expedition of this kind. 1 2 ...read more.