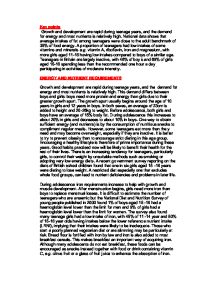 A recent government survey reporting on the diets of British school children found that one in six girls aged 15-18 years were dieting to lose weight. A restricted diet especially one that excludes whole food groups, can lead to nutrient deficiencies and problems in later life. During adolescence iron requirements increase to help with growth and muscle development. After menstruation begins, girls need more iron than boys to replace menstrual losses. It is difficult to estimate the number of teenagers who are anaemic but the National Diet and Nutrition Survey of young people published in 2000 found 1% of boys aged 15-18 had a haemoglobin level lower than the limit for men and 9% of girls had a haemoglobin level lower than the limit for women. The survey also found many teenage girls had a low intake of iron, with 45% of 11-14 year and 50% of 15-18 year olds having intakes below the lower reference nutrient intake (LRNI), implying that their intakes were likely to be inadequate. ...read more.

Pulses, nuts, dried fruit and green vegetables, such as spring greens and broccoli, contain calcium. But it is a myth that spinach is a good source of minerals - although they are present they are closely bound to digested substances in the spinach which prevents their absorption. Fish that is eaten with the bones, such as whitebait or canned sardines, are also a good source. In some areas of the country, hard water provides a significant amount of calcium. An additional source of calcium is calcium-rich mineral water. PHYSICAL ACTIVITY National data suggests that a majority of teenagers in Britain are largely inactive, with 46% of boys and 69% of girls aged 15-18 spending less than one hour a day participating in activities of moderate intensity. The 2004 report At Least Five a Week, Evidence on the impact of physical activity and its relationship to health from the Chief Medical Officer recommended that teenagers (and children) have at least 60 minutes of at least moderate intensity exercise every day. ...read more.