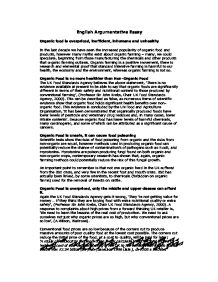 English Argumentative Essay Organic food is overpriced, inefficient, inhumane and unhealthy In the last decade we have seen the increased popularity of organic food and products, however many myths exist about organic farming - many, we could speculate, beginning from those manufacturing the chemicals and other products that organic farming outlaws. Organic farming is a positive movement, there is research and elemental proof that standard intensive farming is harmful to our health, the economy and the environment, whereas organic farming is not so. Organic Food is no more healthier than Non-Organic Food The UK Food Standards Agency believes the above statement, 'There is no evidence available at present to be able to say that organic foods are significantly different in terms of their safety and nutritional content to those produced by conventional farming', (Professor Sir John Krebs, Chair UK Food Standards Agency, 2000). This can be described as false, as numerous items of scientific evidence show that organic food holds significant health benefits over non-organic food. This evidence is concluded by the UN Food and Agriculture Organisation, 'It has been demonstrated that organically produced foods have lower levels of pesticide and veterinary drug residues and, in many cases, lower nitrate contents'. ...read more.

if they think they are buying food with extra nutritional quality or extra safety', (Professor Sir John Krebs, Chair UK Food Standards Agency, 2000). A response to complaints about high prices from a forward thinking UK retailer is, 'We need to learn the lessons of the real cost of production. We need to ask ourselves not just why organic prices are so high, but why conventional prices are so low', (A.Wilson, Waitrose). Conventional food prices are so low because of the corners cut to produce massive amounts of poor quality food at the lowest cost possible. The corners cut reduce the initial price of the food, at a cost to quality, will be paid for later; 'A study carried out by Professor Jules Pretty calculated that the total hidden or 'external' cost of non-organic farming in the UK to the environment and to human health was �2.34 billion per year (based on 1996 data), or �208 a hectare. Organic farming has, by contrast, only one third of the hidden costs of non-organic agriculture, and would reduce the external costs of agriculture by �1.6 billion, to �120 - �140 a hectare. ...read more.

Even if more food were required modern intensive farming destroys the fertility of land - producing the need to purchase more chemical fertilisers, therefore diminishing the task in hand and increasing costs. For those reasons GM is also ruled out as a solution, as GM crops are geared towards intensive farming. Where do these myths come from? Well obviously these myths aren't just made up for no reason, quite the opposite the organisations behind such myths are desperate for you to believe them. The organisations who cultivate these myths are the ones developing and selling chemicals and other products outlawed by organic farming, these organisations obviously feel threatened by the success of organic food and farming. Some other benefits Organic farming methods use little or no chemical pesticides or fertilisers, this helps keep the environment healthy, as well as humans. Nitrates put onto fields in normal intensive agriculture often run into rivers, causing weed to grow and fish and small mammals to die out. So... Organic food is the way forward, it can help solve problems of environmental destruction, improve animal and human welfare, it can help in developing sustainable farming methods for third-world countries and organic food tastes great! ...read more.