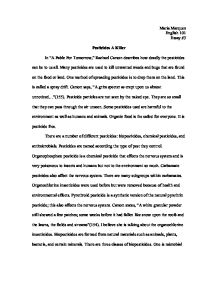 Maria Marquez English 101 Essay #3 Pesticides A Killer In "A Fable For Tomorrow," Rachael Carson describes how deadly the pesticides can be to us all. Many pesticides are used to kill unwanted weeds and bugs that are found on the food or land. One method of spreading pesticides is to drop them on the land. This is called a spray drift. Carson says, "A grim specter as crept upon us almost unnoticed..."(155). Pesticide particles are not seen by the naked eye. They are so small that they can pass through the air unseen. Some pesticides used are harmful to the environment as well as humans and animals. Organic food is the safest for everyone. It is pesticide free. There are a number of different pesticides: biopesticides, chemical pesticides, and antimicrobials. Pesticides are named according the type of pest they control. Organophosphate pesticide is a chemical pesticide that effects the nervous system and is very poisonous to insects and humans but not to the environment so much. Carbamate pesticides also affect the nervous system. ...read more.

Can the US government control what types of pesticides other countries use? This question is very scary for me to think about. I know the US government regulates what kind we use here. We use pesticides that are less harmful to humans, animals and the environment. I live in New Mexico and a lot of the fruit and vegetables that I buy at the store come from other states and probably from other countries. Carson states, "There had been several sudden and unexplained deaths, not only among adults but even among children, who would be stricken suddenly while at play and die within a few hours"(154). Pesticides are more harmful to children and older people. Should schools and daycare centers focus on a pesticide free school? This means only organic food used and the playground free of pesticides? I don't think that it should be pesticide free as long as we are testing the amounts used. ...read more.

I would like to buy them all the time but I just do not have the money to do so. At Wild Oats, I will stop and eat a salad or a pizza from there once in awhile. It always tastes like they just brought it to the store or they just made the pizza from scratch. The fruit and vegetables always taste fresh. Rachael Carson speaks of a place that is not known to mankind of where pesticides killed of all living things within a few days. Carson states, "This town does not actually exist, but it might easily have a thousand counterparts in America or elsewhere in the world"(155). But somewhere in the world one of what she talks about has became a reality. There are many different pesticides available, but they are all very harmful to everyone and the environment. Organic food may be best, but it is very expensive. Everyone should become aware of pesticides and limit their intake of it. By washing fruits and vegetables this limits the intake. ...read more.