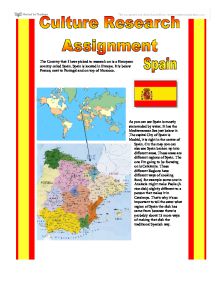 Researching Spanish Food. In Spain there is a lot of variety of foods that they eat, but the most common foods that are eaten Breads, tomatoes, meat, fish, olive oil, legumes, chicken, milk and Eggs.

The Country that I have picked to research on is a European country called Spain. Spain is located in Europe. It is below France, next to Portugal and on top of Morocco. As you can see Spain is mostly surrounded by water. It has the Mediterranean Sea just below it. The capital City of Spain is Madrid, it is right in the centre of Spain. On the map you can also see Spain broken up into different areas. These areas are different regions of Spain. The one I'm going to be focusing on is Catalunya. These different Regions have different ways of cooking food, for example some one in Analucia might make Paella (A rice dish) slightly different to a person that makes it in Catalunya. That's why it's so important to tell the eater what region of Spain the dish has came from because there is probably about 15 more ways of making that dish the traditional Spanish way. Spanish Staple foods In Spain there is a lot of variety of foods that they eat, but the most common foods that are eaten Breads, tomatoes, meat, fish, olive oil, legumes, chicken, milk and Eggs. ...read more.

Paella Paella is one of those food dishes that the whole of Spain cooks. But as I said in the Begin different regions have different ways of cooking foods and this is one of those foods. Paella is a rice dish that is cooked in a giant pan. You put the rice in the pan with all the other ingredients and then you put water in the pan. You can place this giant pan on a camp fire or on a barbeque. The good thing about paella is that it can be cooked in large quantities and be eaten the next day. Paella was once a laborers meal eaten out in the fields, cook over an open camp fire and eaten directly from the pan. The Hunters would go out and hunt for meat, these trips took about a week so they had to bring food that could last a while with out getting stale. So these hunters would kill rabbits and other animals like birds and foxes. They would then skin the animals and use it as an ingredient in there dinner, lunch or what ever. This dish has become very famous and many tourists come to Spain to taste one of the lovely and delish meals. ...read more.

The Spanish usually put dried large white beans, Saffron, pork, and Chorizo into this stew. Food Taboo's in Spain In Spain, the people there will eat anything basically so the Spanish don't really have any food taboos. Except for when it Good Friday, most Spaniards are strict Roman Catholic and they are not allowed to eat meat. So for lunch they have Seafood. Spain Influence on Australian Cuisine Spain's influence on Australia cuisine was little and it wasn't a major one. Immigrants from Spain came out and settle in Australia. Some became farmers and others became shopkeeper. The farmers started to grow tomatoes and it was a good industry. The Spanish also started to cook meals like they did in Spain and showed it to Australian farmers, they liked it but it didn't catch on as much as pizza from the Italians. Olive oil is probably the biggest thing that the Spanish showed the Australians. The way that the Spanish used Olive oil in nearly all there recipes was amazing. Australians today can still use Spanish Olive oil. Also you can go into a special butcher in the city and buy lots of different kinds of meats that are from lots of different places, e.g. Spain, Greek, and Italian. As you can see there wasn't many but still the Spain have influence Australian cuisine in some ways. ...read more.

This report is very interesting to read. The writer clearly has researched the various food types available and demonstrates a clear awareness of cultural variations within dishes. To improve this report in more variety about daily menus, including comparisons to other countries and not just Australia, would be helpful.
****