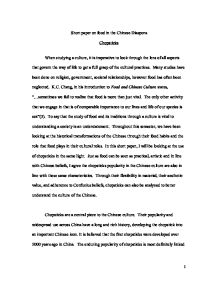 Short paper on food in the Chinese Diaspora - Chopsticks

Short paper on food in the Chinese Diaspora Chopsticks When studying a culture, it is imperative to look through the lens of all aspects that govern the way of life to get a full grasp of the cultural practices. Many studies have been done on religion, government, societal relationships, however food has often been neglected. K.C. Chang, in his introduction to Food and Chinese Culture states, "...sometimes we fail to realize that food is more than just vital. The only other activity that we engage in that is of comparable importance to our lives and life of our species is sex"(3). To say that the study of food and its traditions through a culture is vital to understanding a society is an understatement. Throughout this semester, we have been looking at the historical transformations of the Chinese through their food habits and the role that food plays in their cultural roles. In this short paper, I will be looking at the use of chopsticks in the same light. Just as food can be seen as practical, artistic and in line with Chinese beliefs, I agree the chopsticks popularity in the Chinese culture are also in line with these same characteristics. ...read more.

The Chinese would literally use whatever resource was available. This can be attributed to their beliefs on frugality and conservation, but also lends itself to the fact that the Chinese are constantly faced with famine and have a dire need to be frugal. However, not all chopsticks are made of the common stick we find on the ground. Just like food, chopsticks can also be used in an artistic manner. Chopsticks have been made of precious metals, like gold and silver, and were not uncommon among the wealthy. With the commoner, jade and lacquered wood chopsticks were only brought out in certain times of celebration. In the royal courts in ancient times the emperor would only eat with silver chopsticks. It was believed that the silver would turn black when it came into contact with poison and thus help protect the emperor's health (www.asianculture/chopsticks/46.html). Although with the obvious practical use, chopsticks have also been subject to elegant craftsmanship and elaborate carvings. The chopsticks can be quite artistic and contain Chinese calligraphy with meanings attributed to them. The onset of Confucianism is also believed to have further cemented the use of chopsticks as the primary Chinese eating utensil. ...read more.

Many Chinese superstitions revolve around chopsticks as well. For example, if you find an uneven pair at your table seating it is believed that you will miss the next train, boat or plane you are trying to catch. Also, dropping your chopsticks is a sign of bad luck to come. And with adherence to strict Chinese etiquette, chopsticks have their own set of rules that one must follow. Among these is to never rest your chopsticks by sticking them point-first into your bowl of rice. This is reminiscent of ancestral offerings and can be seen as disrespectful. One is not to point with chopsticks, click them, suck on them, or stab the food with them. Chopsticks are also almost always held in the right hand. This spans back to an ancient practice that believed the left hand was the hand used for unclean work. (www.asianculture/chopsticks/46.html). The popularity of chopsticks coincides directly with many of the popular ways of thinking and cultural beliefs. The Chinese have a strong observance of balance and etiquette, conservativeness and the artistic pleasures, all which can be encompassed in the chopstick. In looking at the chopstick, one can glance into a deeper understanding of the Chinese culture and in some ways shed some new light into their ways and practices of life. ...read more.