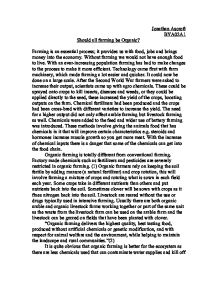 Should all farming be Organic?

Jonathan Ascroft BYA02A1 Should all farming be Organic? Farming is an essential process; it provides us with food, jobs and brings money into the economy. Without farming we would not have enough food to live. With an ever-increasing population farming has had to make changes to the process to make it more efficient. Technology came first with farm machinery, which made farming a lot easier and quicker. It could now be done on a large scale. After the Second World War farmers were asked to increase their output, scientists came up with agro chemicals. These could be sprayed onto crops to kill insects, diseases and weeds, or they could be applied directly to the seed, these increased the yield of the crops, boosting outputs on the farm. Chemical fertilizers had been produced and the crops had been cross-bred with different varieties to increase the yield. The need for a higher output did not only affect arable farming but livestock farming as well. ...read more.

It is quite obvious that organic farming is better for the ecosystem as there are less chemicals used that can contaminate water supplies and kill off organisms. The soil retains its richness by holding in more nutrients, as it is not intensively farmed. On organic farms a wider range of organisms can be found in higher numbers. This is because the use of pesticides and herbicides are strictly forbidden. Chemicals can still be used but in monitored amounts. Beneficial insect are used to reduce pests, ladybirds can be used to reduce green fly. Large numbers or organisms make an ideal area to live in for a small bird or mammal. With an increase in insects there tends to be an increase in the population of birds, especially ground nesting birds such as partridges and pheasants. As herbicides are limited fields have to be weed raked. This is not done on conventional farms as they can control weeds by herbicides. ...read more.

It would increase the number of producers at the bottom of the food web and increase all of the consumers going up it. The soil would not be farmed as intensely so the soil would be thriving with nutrients. There would be an increase in the number of hedges and a large increase of fencing as there would be more predators so action would have to be taken to prevent loss of livestock and poultry. Organic farms are beneficial to the environment but they are not as good as they sound. Conventional farming is important as not all crops grown end up on our plates, crops go to seed, pet food, fuels, fabrics and many more. If all farming were organic then the volume of imported goods would increase and this would put a lot of farmers out of business. (1)Pg 37 of Agriculture and food by Michael Raw and peter Atkins published in 1995 by Collins Educational. (2) www.soilassociation.org (3) Information about ground nesting birds from an arable farmer Christopher Ascroft who is a conventional farmer. Wilbraham Farms telephone number 07768368393 (4) http://www.guardian.co.uk/theissues/article/0,6512,765544,00.html (5) http://news.bbc.co.uk/1/hi/sci/tech/2017094.stm ...read more.