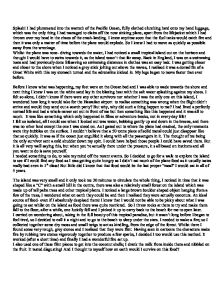 Splash! I had plummeted into the warmth of the Pacific Ocean, fully clothed clutching hard onto my hand luggage, which was the only thing I had managed to claim off the now sinking plane, apart from the lifejacket.

Splash! I had plummeted into the warmth of the Pacific Ocean, fully clothed clutching hard onto my hand luggage, which was the only thing I had managed to claim off the now sinking plane, apart from the lifejacket which I had thrown over my head in the chaos of the crash-landing. I knew anytime soon that the fuel tanks would catch fire and then it was only a matter of time before the plane would explode. So I knew I had to move as quickly as possible away from the wreckage. Whilst the plane was nose- diving towards the water, I had noticed a small tropical island out on the horizon and thought I would have to swim towards it, as the island wasn't that far away. Back in England, I was on a swimming team and had previously done lifesaving so swimming distances in clothes was an easy task. I was getting closer and closer to the shore when I noticed a grey stick jolting out above the waves, I realised it was a dorsal fin of a Great White with this my stomach turned and the adrenaline kicked in. My legs began to move faster than ever before. ...read more.

I had the most awful time that night, I couldn't get off to sleep at all, and to top it off I awoke in the morning to feel a cold wet snout smelling my face. As you can probably guess, I was pretty shocked to see a wild bore gazing down at me! As I did not know they were living on the island and at first I was quite weary of them but when I realised that it meant no harm and noticed that it was actually quite cute. This pig was my friend over the next 5 years of my stay and I used to talk to it on a daily basis pretending it was one of my friends- as I couldn't help but notice slight similarities between it and one of my friends back home! He kept me entertained also and helped me to find edible berries in the forests undergrowth. We grew very close and I helped to keep him groomed well and he was my little island pet. It also was someone to talk to when I was fishing in the sea with my hand-made spear. I sharpened a piece of bamboo and then used twine to attach a sharp rock to the end of it, I managed ...read more.

I was eventually rescued after 5 years on the island by a biological lab. Boat which had noticed the thick smoke and knew no one live on that island so wondered what it was, due to their curiosity I was rescued and saved. I enjoyed the freedom of the island and the ways that you could just walk around looking a state and no one was there to judge you. I learnt how to fend for myself in both the cooking sense and that I was totally independent, also the fact that I managed to gain a good tan added to the good points of the island, I also lost quite a lot of weight due to living 5 years on just a diet of fruit, fish and occasionally pork. The things I really hated on the island were the facts that you were totally isolated, I think I would have preferred it if there was another person there with me. I also hated the food; I couldn't stand fish, bananas or coconuts before I went to the island and I still can't but I had to make do with what I had. I'm now going to play a song off the CD I had with me-[Learn to Fly, by the foo fighters} ...read more.