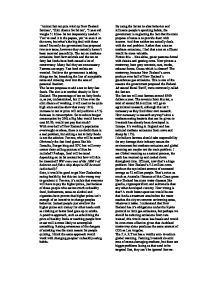 Sure, it would be good to get New Zealanders eating healthily, but this tax is the wrong way to go about it.

'Animal fart tax puts wind up New Zealand farmers', 'Slim chance for fat tax', '5 year old weighs 51 kilos- fat tax desperately needed'- You've read it in the papers, you've seen it on the news, but what's the big deal with these taxes? Recently the government has proposed two new taxes, however they certainly haven't been received peacefully. The tax on methane emissions from farm animals and the tax on fatty fast foods have both caused a lot of controversy. Many feel they are unnecessary. Farmers are angry. Fast food outlets are worried. I believe the government is taking things too far, breaching the line of acceptable taxes and crossing over into the area of personal freedom. The fat tax proposes to add a tax to fatty fast foods. The aim is to combat obesity in New Zealand. The percentage of tax on fatty foods is, as yet, undetermined, but if it has even the slim chance of working, it will need to be quite high since studies show that every 10 % increase in tax or price will only achieve a 5 % decrease in consumption. ...read more.

Instead people just swallow the higher prices and money for other needs such as clothing or better food goes up in smoke. A positive approach, such as subsidizing the price of healthy foods or teaching people how to eat well is more likely to accomplish something. Raising awareness of the dangers of smoking was the main reason for people quitting. I think the same approach would work with changing peoples' unhealthy eating habits. By using the fat tax to alter behavior and influence people's spending habits, the government is neglecting the fact that the main purpose of taxes is to provide them with income. And then neither tax actually deals with the real problem. Rather than a tax on methane emissions, I feel that a tax on effluent would be more valuable. Picture this... blue skies, green pastures dotted with daisies and grazing cows. Now picture a motorway, bare grey concrete, cars, trucks, exhaust fumes. Guess which is cleaner? The motorway, because New Zealand's cows produce over half of New Zealand's greenhouse gas emissions. ...read more.

I understand that New Zealand has it's obligations under the Kyoto protocol to limit gas emissions, but perhaps we should be reducing emissions from cars instead, this would cause less hassle and would be even more effective given that Auckland motor-way alone produces the same amount of CO2 as Los Angeles. The F.A.R.T tax has a worthy aim- to reduce global warming. Farming livestock do emit tons of ozone-damaging methane, but there are bigger problems facing us that need to be targeted first, they can't be ignored forever. Cleaning up New Zealands water will be a costly and lengthly process, but the longer the government avoids it the worse it will get. Unless more of an effort is made to fulfill NZ's clean green reputation, we may as well ditch the slogan now. As for the Fat Tax, making fatty food more expensive is not likely to successfully change people's eating habits. And since New Zealanders already pay tax on income, goods and services, property, estate inheritance and interest, it's not surprising that these taxes have had such a poor reception and been received with such little enthusiam. ...read more.