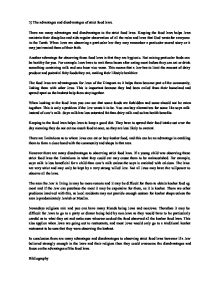 The advantages and disadvantages of strict Jewish food laws.

3) The advantages and disadvantages of strict food laws. There are many advantages and disadvantages to the strict food laws. Keeping the food laws helps Jews maintain their discipline and aids regular observation of all the rules and laws that God wrote for everyone in the Torah. When Jews are observing a particular law they may remember a particular sacred story or it may just remind them of their faith. Another advantage for observing these food laws is that they are hygienic. Not mixing particular foods can be healthy for you. For example Jews have to wait three hours after eating meat before they can eat or drink something containing milk and one hour vice versa. This means that a Jew has to limit the amount of dairy produce and potential fatty foods they eat, making their lifestyle healthier. ...read more.

Soya milk has less saturated fat than dairy milk and so has health benefits. Keeping to the food laws helps Jews to keep a good diet. They have to spread their food intake out over the day meaning they do not eat too much food at once, so they are less likely to overeat. There are limitations as to where Jews can eat or buy kosher food, and this can be an advantage in enabling them to form a close bond with the community and shops in that area. However there are many disadvantages to observing strict food laws. If a young child was observing these strict food laws the limitations in what they could eat may cause them to be malnourished. ...read more.

There are other problems involved with this, as local residents may not provide enough custom for kosher shops unless the area is predominately Jewish or Muslim. Nowadays religions mix and you can have many friends being Jews and non-Jews. Therefore it may be difficult for Jews to go to a party or dinner being held by non-Jews as they would have to be particularly careful as to what they eat and make sure whoever cooked the food observed all the kosher food laws. This also applies when Jews are going out to restaurants, and most Jews would only go to a traditional kosher restaurant to be sure that they were observing the kashrut. In conclusion there are many advantages and disadvantages to observing strict food laws however if a Jew believed strongly enough in the laws and their religion then they could overcome the disadvantages and focus on the advantages of the food laws. ...read more.