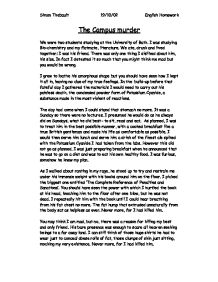 The Campus murder We were two students studying at the University of Bath. I was studying Bio-chemistry and my flatmate, literature. We ate, drunk and lived together; I was his friend. There was only one thing I disliked about him, his size. In fact I detested it so much that you might think me mad but you would be wrong. I grew to loathe his amorphous shape but you should have seen how I kept it all in, leaving no clue of my true feelings. In the build-up before that fateful day I gathered the materials I would need to carry out his painless death, the condensed powder form of Potassium Cyanide, a substance made in the most violent of reactions. ...read more.

I was just preparing breakfast when he announced that he was to go on a diet and was to eat his own healthy food. I was furious, somehow he knew my plan. As I walked about ranting in my rage, he stood up to try and restrain me under his immense weight with his books around him on the floor. I picked the biggest one entitled 'The Complete Reference of Penalties and Sanctions'. You should have seen the power with which I hurtled the book at his head, knocking him to the floor after one blow, but he was not dead. ...read more.

How I would've done anything just to have one last pint and hearty chuckle at the pub. Never more, for I had killed him. I worked myself into a desperate fury, trying to block out all the good times we had together. As I paced around the flat shouting in my rage I couldn't help but notice all the possessions around me that had belonged to the betrayed, the oversized bed in the corner, and the coffee mug in the sink. I closed my eyes to try and get any relief from this hellish nightmare but all I could think of was him. His voice echoed in my ear and I was driven to the most extreme insanity, I could've sworn he had come to haunt me. Never more, for he was dead. Simon Thebault 19/10/02 English Homework ...read more.