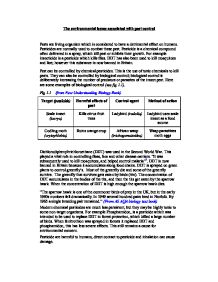 The environmental issues associated with pest control Pests are living organism which is considered to have a detrimental effect on humans. Pesticides are normally used to combat these pest. Pesticide is a chemical compound often delivered in a spray, which kill pest or inhibits their growth. For example insecticide is a pesticide which kills flies. DDT has also been used to kill mosquitoes and lice; however this substance is now banned in Britain. Pest can be controlled by chemical pesticides. This is the use of toxic chemicals to kill pests. They can also be controlled by biological control; biological control is deliberately increasing the number of predators or parasites of the insect pest. Here are some examples of biological control (see fig 1.1). Fig 1.1 (from New Understanding Biology Book) Target (pesticide) Harmful effects of pest Control agent Method of action Scale insect (icerya) ...read more.

In 1949 several hundred pairs bred in Norfolk. By 1965 a single breeding pair remained." (From AS AQA biology text book) Modern chemical pesticides are much less persistent, but they may be highly toxic to some non-target organisms. For example Phosphamidon, is a pesticide which was intended to be used to replace DDT in forest protection, which killed a large number of birds. When fenitrothion was sprayed in forests it replaced DDT and phosphamidon, this has less severe effects. This still remains a cause for environmental concern. Pesticide are harmful to humans, direct contact to pesticide and inhalation can cause damage. * Each year in the U.S., some 110,000 pesticide poisonings are reported by poison control centers, and 23,000 people visit emergency rooms for the same reason. And every year, about 20 people nationwide -- mostly children -- die from accidental pesticide poisoning. ...read more.

If too much pesticide is added to the crops this is then washed off by rain. This water falls to the water bed then into a river or a lake, this can cause contamination because private well are not tested for contamination. Since food is made out of crops and other crop plants trace amounts of pesticide can be found. "SMALL doses of pesticide are enough to hit frogs where it hurts them most -in the immune system. This might explain the mysterious disappearance of amphibians all around the globe." (From New Scientist 04 May 2002) "Pesticides are believed to break down under UV light to form poisons that trigger deformities in amphibians (New Scientist, 13 September 1997, p 18) , and weedkillers can turn male frogs into females." This shows that pesticides effect the population of the frogs. ...read more.