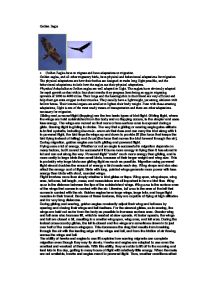 Golden Eagle * Golden Eagles have to migrate and have adaptations to migration. Golden eagles, and all other migratory birds, have physical and behavioural adaptations for migration. The physical adaptations are how their bodies are designed to make long flight possible, and the behavioural adaptations include how the eagles use their physical adaptations. Physical Adaptations: Golden eagles are well adapted to flight. The eaglets have obviously adapted for rapid growth so that within four short months they progress from being an egg to migrating upwards of 2000 to 4000 miles. Their lungs and the haemoglobin in their blood are very efficient and help them get extra oxygen to their muscles. They usually have a lightweight, yet strong, skeleton with hollow bones. Their internal organs are smaller to lighten their body weight. Even with these amazing adaptations, flight is one of the most costly means of transportation and there are other adaptations necessary for migration. Gliding and powered flight (flapping) are the two basic types of bird flight. Gliding flight, where the wings are held outstretched from the body and no flapping occurs, is the simpler and uses less energy. The wings are moved so that more or less surface area is exposed during a glide. ...read more.

For the slowest glides, as in soaring, the wings are held out as far from the body as possible to increase surface area. Greater wing and tail area also increase lift, which is needed at slow speeds. At faster speeds, the wings and tail are closed a bit, resulting in a smaller wing span, wing area, and tail area. During the fastest cross-country glides, the tail is closed and the wings are sometimes drawn in to just over half of the maximum wingspan. This decreases the drag that results from breaking through the air with the leading edge of the wings and tail, and from the friction of air flowing across the wings and tail. The ability of hawks and eagles to use lift explains how soaring migrants can complete migration even though they may fly slowly. Hawks and eagles are adapted to use even the smallest and weakest of thermals. With this ability, they are able to lift off in the morning and land late in the day, getting in many hours of flight with relatively little energy. When thermals are not available, hawks and eagles resort to powered flight. Thus, weather conditions affect migration strategies of these species. ...read more.

Behavioural Adaptations: The behavioural adaptations include type of flight (flapping vs gliding), flight speed, altitude, flight direction, and seasonal timing. Migrating birds must decide how fast to fly, how high to fly and which direction to fly. For example, a golden eagle must decide when to glide and when to flap. Golden eagles must decide how fast to fly. If it flies too fast, it will use energy faster, and it may run out of fat. If an eagle flies too slowly it may not complete its migration. Studies show that migrating birds adjust their flight speed to either minimize the energy they use or maximize how far they travel. By flying faster in headwinds and slower in tailwinds, a migrating golden eagle can increase the distance it travels. Golden eagles that complete migration, probably select speeds that promote a fast yet energy-efficient migration Behaviour and physical adaptations As with other members of the hawk family, eagles have powerful feet and talons for grasping their prey and a large hooked bill for eating it. The large wing span is about 6 to 7 feet which enables them to soar on warm mountain air thermals. Golden eagles may travel 100 miles or more searching for food. Most prey are taken by surprise as the eagle sweeps out from behind a hill or rocky crag. They are well adapted to cold weather. ...read more.