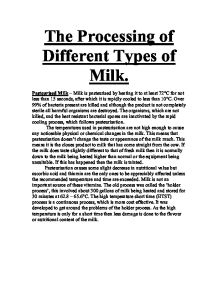 The Processing of Different Types of Milk.

The Processing of Different Types of Milk. Pasteurised Milk - Milk is pasteurised by heating it to at least 72�C for not less than 15 seconds, after which it is rapidly cooled to less than 10�C. Over 99% of bacteria present are killed and although the product is not completely sterile all harmful organisms are destroyed. The organisms, which are not killed, and the heat resistant bacterial spores are inactivated by the rapid cooling process, which follows pasteurisation. The temperatures used in pasteurisation are not high enough to cause any noticeable physical or chemical changes in the milk. This means that pasteurisation doesn't change the taste or appearance of the milk much. This means it is the closes product to milk that has come straight from the cow. If the milk does taste slightly different to that of fresh milk then it is normally down to the milk being heated higher than normal or the equipment being unsuitable. If this has happened then the milk is tainted. Pasteurisation causes some slight decrease in nutritional value but ascorbic acid and thiamin are the only ones to be appreciably affected unless the recommended temperature and time are exceeded. ...read more.

It has a higher percentage of fat. Examination - A rich white colour, thicker consistency than the others, strong and creamy. Packaging - Cardboard carton, red/blue. Nutritional Value - protein - 2.8g Fat - 3.6g Calcium - 120mg Jersey And Guernsey Milk - This milk is made from different breeds of cows (Jersey and Guernsey) to 'ordinary' milk. It contains a higher proportion of fat than 'ordinary' milk an average 4.8%, by law it must contain at least 4%. Examination - thick, creamy, has a cream line, strong but pleasant flavour. Packaging - plastic carton with a gold top. Nutritional value - protein - 3.4g Fat - 5.2g Calcium - 134mg Organic Whole Milk - Organic whole milk is processed in the same way as ordinary whole milk but organic milk has no added additives. It is from cows, which have been reared on grass (which has had no treatment) only. Examination - darker cream colour, creamy flavour and sweet smell. Packaging - cardboard carton with a light blue and white label. Nutritional Value - Protein - 3.2g Fat - 4g Concentrated Milks. Water can readily be removed from milk by evaporation. Products were made for many years by this method, but all had a marked 'cooked milk flavour'. ...read more.

The vitamins are badly affected in that vitamin C content is halved, B12 is destroyed and one third of thiamin is lost. The biological value of the proteins is reduced. Examination - Creamy yellow, sulphur smell and strong flavour. Packaging - Cardboard carton with green and white labels. Nutritional value - Protein - 3.4g Fat - 1.7g Calcium - 122mg Uses - Can be kept longer so probably used by manufacturers in products. Conclusion. I have found that the way in which the milk is process determines the milk qualities. For example, whole milk has a creamy flavour and texture as it has only been pasteurised but the sterilised milk has had a much more severe heat process and as a result has a strong cooked milk flavour. I have also found out that vitamins are destroyed where there is a lot of processing but in evaporated milk there is a lot of calcium, which is probably added by the manufacturer. Also other nutrients are destroyed with the more severe processing for example the protein is halved in UHT milk. The type of milk produced depends on the animal and breed it is taken from because the goats milk was very different form the cows milk and depending on what breed the cows were the protein, fat and calcium amount in the milk varied. ...read more.