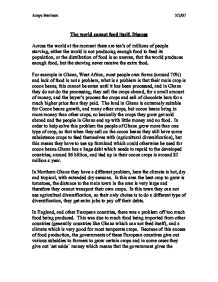 The world cannot feed itself. Discuss

The world cannot feed itself. Discuss Across the world at the moment there are ten's of millions of people starving, either the world is not producing enough food to feed its population, or the distribution of food is so uneven, that the world produces enough food, but the starving never receive the extra food. For example in Ghana, West Africa, most people own farms (around 70%) and lack of food is not a problem, what is a problem is that their main crop is cocoa beans, this cannot be eaten until it has been processed, and in Ghana they do not do the processing, they sell the crops abroad, for a small amount of money, and the buyer's process the crops and sell of chocolate bars for a much higher price than they paid. ...read more.

In order to help solve this problem the people of Ghana grow more than one type of crop, so that when they sell on the cocoa beans they still have some subsistence crops to feed themselves with (agricultural diversification), but this means they have to use up farmland which could otherwise be used for cocoa beans.Ghana has a huge debt which needs to repaid to the developed countries, around $6 billion, and tied up in their cocoa crops is around $2 million a year. In Northern Ghana they have a different problem, here the climate is hot, dry and tropical, with extended dry seasons. ...read more.

Because of this excess of food production, the governments of these European countires give out various subsidies to farmers to grow certain crops and in some cases they give out `set aside` money which means that the government gives the farmer money not to grow crops on their fields. In countries like Ghana they do not have such a luxary. As an extended system (all countries, and populations included) the global quantities of food produced could feed all of the world's population, but as the food is distributed so unevenly many people are starving while others have so much food that some is left after meals and thrown away. Amye Harrison 5/2/07 ...read more.