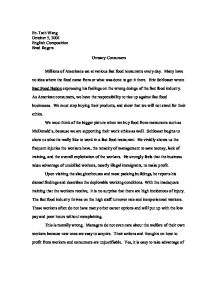 En-Tseh Wang October 5, 2001 English Composition Brad Rogers Unwary Consumers Millions of Americans eat at various fast food restaurants every day. Many have no idea where the food came from or what was done to get it there. Eric Schlosser wrote Fast Food Nation expressing his feelings on the wrong doings of the fast food industry. As American consumers, we have the responsibility to rise up against fast food businesses. We must stop buying their products, and show that we will not stand for their ethics. We must think of the bigger picture when we buy food from restaurants such as McDonald's, because we are supporting their work ethics as well. Schlosser begins to show us what its really like to work in a fast food restaurant. He vividly shows us the frequent injuries the workers have, the tenacity of management to save money, lack of training, and the overall exploitation of the workers. He strongly feels that the business takes advantage of unskilled workers, mostly illegal immigrants, to make profit. Upon visiting the slaughterhouses and meat packing buildings, he reports his dismal findings and describes the deplorable working conditions. ...read more.

He started to have abdominal cramps that were similar to labor pains, which eventually lead to bloody stools. The doctors tried to save his life, but the Shiga toxins were destroying his internal organs. He died a day after his mother's birthday (Schlosser 200). A little over a year ago, I ate at a McDonald's and ordered a number one: Big Mac, French Fries, and a Coke. I sat down and after finishing my beef filled fries ("McDonald's did acknowledge that its fries derive some of their characteristic flavor from 'animal products'"), couple sips of my coke, started on my Big Mac. Half way into it, I looked at what I was eating. I noticed that my burger had something in it, which resembled a human toe nail. This shocked me and I did not know what to do, so I threw away my food and just left. I should have complained to the managers, but I was too grossed out (Schlosser 128). Could I have mistaken what I saw? Maybe it was an animal toe nail. After reading "Fast Food Nation", I am outraged by the way fast food restaurants get their food and how they operate. Feeding us inferior meat for our hard earned money?! ...read more.

Congress has passed safety laws that prevent businesses from preying on children and protect workers from harm. Unfortunately, these laws are not enforced, due to the power that these companies hold. Managers of big fast food companies such as McDonald's continue to benefit from profits made by luring children to eat their food. If the consumers just stop buying the food, they can pressure the fast food industry to changing the way food is acquired and produced. America's economy must change the way they think and act. First, we must rebel against fast food companies by not eating their food and spread the message throughout our country. We must exploit the food companies for what they are, whether it may be by television, campaigns, or protests. As time goes by, sooner or later, these companies will yield to the consumers. After all we are the one's who are supporting them. The citizens of America should not stand for greedy fast food companies preying on them for more money. We must realize that what they are doing is wrong, and stop them at once. This particular industry has gone too far, and has consequently threatened the well-being of the country, it must stop. ?? ?? ?? ?? ...read more.