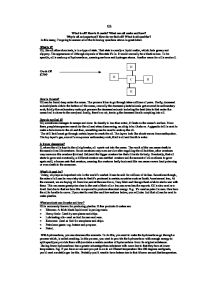 What is oil? How is it made? What can oil make and how? Why is oil so important? How do we find oil? What is oil used for?

Oil What is oil? How is it made? What can oil make and how? Why is oil so important? How do we find oil? What is oil used for? In this essay, I'm going to answer all of the following questions above in great detail. What is it? Oil, like all other chemicals, is in a type of state. That state is usually a liquid matter, which feels greasy and slippery. The appearance of it though depends of the state it's in. It would normally be a black colour. To be specific, oil is made up of hydrocarbons, meaning carbons and hydrogen atoms. Another name for oil is crude oil. Crude Oil (CH4) How is it made? Oil can be found deep under the ocean. The process it has to go through takes millions of years. Firstly, deceased animals/plants sink to the bottom of the ocean, secondly the deceased plants/animals get covered be sedimentary rock, thirdly the sedimentary rocks put pressure the deceased animals including the heat (due to that under the ocean bed is closer to the core) and finally, there's no air, turning the deceased fossils morphing into oil. How do we find it? Oil, sometimes manages to escape and since its density is less than water, it floats on the ocean's surface. ...read more.

What products can it make and how? Oil is commonly known for producing plastics. Other products it makes are: * Bitumen- A thick black liquid used in paving roads. * Heavy fuels- Used by aeroplanes and ships. * Lubricating oils- used as fuel for cars and vans. * Kerosene- Used as fuel for aeroplanes and ships. * Petroleum gases- e.g. butane and propane. * Petrol. With hydrocarbons, you can decrease the amounts. To do this, you need to make the hydrocarbons go through a process which, is called cracking. In this process, you need to provide the hydrocarbons with enough energy to split apart (you provide them with) contains a certain number of hydrocarbons from its original substance. Having fewer hydrocarbons has a greater advantage than substance with more due to that they burn at lower temperature. E.g. If you have a oven and you put in on to a different temperature like 180 degrees centigrade, you'd need a suitable gas for this. Probably you'd want to have butane due to that it burns around that temperature. In big business that produce gigantic quantities of oil related products use catalysts to quickly destroy hydrocarbons. These are big machines that burn the hydrocarbons at certain temperatures (depending on the final product wanted). ...read more.

Old black records that used to play music were made of plastic. Many other things are used by plastics. What if the world never had plastic Without plastic, metal would be used and though durable and strong, it's reacts with water and oxygen meaning it's unsafe to use outdoors (unless coated with layers of paint). No more fridges due to that fridges are made of plastic and plastic reflects the coldnessback onto the food. If there was no plastic, people won't be able to store meat, meaning that meat has to be cooked fresh and ithis would cause a continuous demand for more meat, and this, can cause to more slaughtering of animals. Nearly everywhere you go, you can see plastic is used for something thatis important like rubbish bins. If we were to use more metal instead of plastic though, it would be cheaper but less useful. Conclusion Overall, oil is a great and fantastic product. Without it, we would suffer with diseases due to rotting foods and we could all die. If it weren't for the creation of plastics and gases, we would never be here as central heating keeps us warm and frozen food keeps bacterial away. Oil though, will one day run out if we keep taking it from the ocean and then we could die but, thankfully the oil companies are slowing down the amount of oil. By Gary Kimmelman 10.6 ...read more.