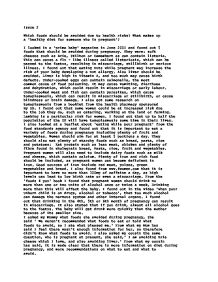 Which foods should be avoided due to health risks? What makes up a 'healthy diet for someone who is pregnant'?

Issue 2 Which foods should be avoided due to health risks? What makes up a 'healthy diet for someone who is pregnant'? I looked in a 'prima baby' magazine in June 2001 and found out 5 foods that should be avoided during pregnancy. They were: soft cheeses such as Brie, Stilton or Camembert as can contain listeria. This can cause a flu - like illness called listeriosis, which can be passed to the foetus, resulting in miscarriage, stillbirth or serious illness. I found out that eating nuts while pregnant may increase the risk of your baby developing a nut allergy. Also liver should be avoided. ...read more.

I also looked at a leaflet about 'eating while your pregnant' from the food standards agency and found out that it is important to eat a variety of foods during pregnancy including plenty of fruit and vegetables. Women should aim for at least 5 portions a day. They should also eat plenty of starchy foods such as bread, pasta, rice and potatoes: Eat protein such as lean meat, chicken and plenty of fibre found in wholegrain bread, Pasta, rice, fruit and vegetables. Pregnant women will also need to include dairy foods such as milk and cheese, which contain calcium. Plenty of iron and rich food should be included, as pregnant women can become deficient in iron. ...read more.

It also stated that if you drink, almost all alcohol goes to the foetus. The baby will get drunk more quickly than the mother because of its smaller size. I asked my Mummy what foods she avoided during pregnancy, She said ' We weren't recommended what foods to eat or told what foods to avoid, so I ate what pleased me.' From what my Mum has said I feel there wasn't enough information for her, so therefore didn't know what foods to avoid. I also asked my cousin the same question, who is pregnant at present, she said,' I am avoiding Brie cheese which I love, and also avoiding liver.' From what my cousin has said, it is made clear that there is more information on diet during pregnancy, and more recommendations on what to eat and what to avoid. ...read more.