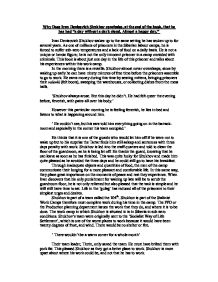 Why Does Ivan Denisovich Shukhov concludes, at the end of the book, that he has had &quot;a day without a dark cloud. Almost a happy day.&quot;

Why Does Ivan Denisovich Shukhov concludes, at the end of the book, that he has had "a day without a dark cloud. Almost a happy day." Ivan Denisovich Shukhov wakes up to the same setting he has woken up to for several years. As one of millions of prisoners in the Siberian labour camps, he is forced to suffer sub-zero temperatures and a lack of food on a daily basis. He is not a unique or heroic figure; he is not the only innocent prisoner in a camp crowded with criminals. This book is about just one day in the life of this prisoner and talks about his experiences within this work camp. In the morning there is a reveille. Shukhov almost never oversleeps, since by waking up early he can have ninety minutes of free time before the prisoners assemble to go to work. He earns money during this time by sewing mittens, bringing prisoners their valenki (felt boots), sweeping the warehouses, or collecting dishes from the mess halls. 'Shukhov always arose. But this day he didn't. He had felt queer the evening before, feverish, with pains all over his body.' However this particular morning he is feeling feverish, he lies in bed and listens to what is happening around him. ...read more.

Tiurin, the team leader, had fixed the work quota into the teams favour. He had to deliberate over the 'percentage' meaning a paper stating the amount of work done and the percentage of the plan it amounts to, on which the team's rations for the next five day depended. The hundred and fourth had a clever team leader, who concentrated on the work-report than the work itself. ' A clever team leader was one who concentrated on the work-report. That was what kept the men fed. Tiurin had to prove that work, which had not been done, had been done, to turn a job that was rated low, into one that was rated high. Tiurin did this and came back with a good one, which was surprising considering that they did not actually do any work during the day. This also meant that Shukhov was content that he was definitely having food for the next five days. During his work he had to build a wall being a fine mason. He built a wall with Senka and Kilgas. He enjoyed building the wall due to he was very skilled at it; he built the way with great pace and accuracy. He became warm due to doing it so fast which was essential to survive in the camp. ...read more.

At first it was giving him pain, however as the day wore on he got better and by the end of the day he had forgotten about his illness. In the conclusion of the day Shukhov recalls: 'Shukhov went to sleep fully content. He'd had many strokes of luck that day: they hadn't put him in the cells; they hadn't sent the team to the settlement; he'd pinched a bowl of kasha at dinner; the team leader had fixed the rates well; he'd built a well and enjoyed doing it; he'd smuggled that bit of hacksaw-blade through; he'd earned something from Tsezar in the evening; he'd bought that tobacco. And he hadn't fallen ill. He'd got over it. A day without a dark cloud. Almost a happy day.' The reason that it was only 'almost a happy day' is because he is in a work camp in hard conditions where he must try and survive. Also he comments on not having a dark cloud. He forgets the re-count at night and the hold up after work, however still finds the day to be a good one. Also certain things could have gone wrong that would have made his day a bad one. He could have been sent to the cells, he could have been caught with the hacksaw blade; also he could have been confiscated of his hidden food. This could have been down to luck or even good planning. ...read more.