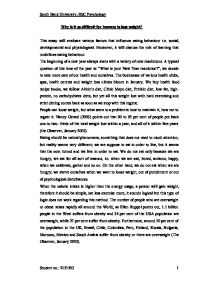 Why is it so difficult for humans to lose weight?

Why is it so difficult for humans to lose weight? This essay will evaluate various factors that influence eating behaviour i.e. social, developmental and physiological. Moreover, it will discuss the role of learning that underlines eating behaviour. The beginning of a new year always starts with a variety of new resolutions. A typical question of this time of the year is: "What is your New Year resolution?", we decide to take more care of our health and ourselves. The businesses of various health clubs, spas, health centres and weight loss clinics bloom in January. We buy health food recipe books, we follow Aitkin's diet, Clinic Mayo diet, Pritikin diet, low-fat, high-protein, no carbohydrates diets, but yet all this weight lost with hard exercising and strict dieting comes back as soon as we stop with this regime. People can loose weight, but what seem to a problem is how to maintain it, how not to regain it. Nancy Gerard (2003) points out that 90 to 95 per cent of people put back one-to two- thirds of the total weight lost within a year, and all of it within five years (the Observer, January 2003). Eating should be natural phenomena, something that does not need to much attention, but reality seems very different; we are suppose to eat in order to live, but it seems that the coin turned and we live in order to eat. We do not eat only because we are hungry, we eat for all sort of reasons, i.e. when we are sad, bored, anxious, happy, when we celebrate, gather and so on. ...read more.

According to Capaldi (2001), experience influence food preferences in regard to later eating behaviour. Studies with humans showed increased salt consumption in later life, if a person was deprived of sodium at the early stage of life. Furthermore, Beauchamp and Moran (1985) found that infants who consumed sweetened water at the very early stage in life, showed increases preference for the same at the age of two, compared with the infants not exposed to sweetened water. More importantly, no increase preference was found for other sweet beverages or food (Capaldi 2001). Furthermore, people learn to prefer some flavours, if a flavour is related to sweetness it would become preferred. For example, coffee itself has an unpleasant and bitter taste, but taken with sugar and milk would become pleasant. Moreover, preference for nutritious food is also in-born; we have a predisposition to learn to preserve flavours that are associated with nutritious foods (Capaldi 2001). Capaldi et al. (1987) in their study showed that flavour-nutrient learning occurs independently of flavour learning. Rats prefer a flavour that was given to them in saccharine 30 minutes prior to lab feeding, than a flavour in saccharine when no food was given after (Capaldi 2001). People prefer food that is calorie consistent, therefore high-fat foods would be preferred to low-fat foods. Balles et al. (1981) study showed higher preference "for a flavour associated with two-grams of a four-calorie food, then for a flavour associated with four-grams of a two-calorie food" (cited in Capaldi, 2001, p 60). Furthermore, food consumed under high deprivation would increase the preference for that food. ...read more.

Moreover, 33 billion dollars goes to Weight Watchers, while the weight loss surgeries increased 50 per cent from the last year's figures in the USA. Insurance companies are concerned if it is more cost-effective to leave people fat or to make them thin with a weight loss surgery, is it more profitable to pay for a heart attack or a cardio-vascular decease as a consequence of obesity, or to pay up to 30 thousand dollars for a weight loss surgery although it carries a big risk (America's Fattest City, Channel 4, Granada TV, January 2004). Currently in the UK the government intervenes in Britain's obesity crisis, investing �2 million in a program to fight obesity. By involving and educating families how to pack children's lunch boxes, by banning crisps and chocolates from schools and replacing them with healthy food, they hope that obesity increase would stop among school children. Nonetheless, economy is a strong force and companies that make profits out of obesity epidemic would not give up easily. People's eating behaviour is influenced by genetics, but genetic predisposition alone cannot be accounted for a cause of obesity. Diets and life styles habits, food preference, early experience of the control of food intake and socio-cultural factors all shape our eating behaviour. Unfortunately, there is no a "magic pill" which helps to loose weight and maintain it, and certainly the notion of the "set point" does not encourage an easy weight loss, therefore, we are left again with "eat less-exercise more" or change your "food brand", which is not easy, but obviously for now the only way to healthy life without excess weight. ...read more.