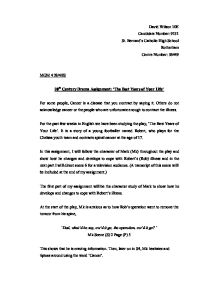 20th Century Drama Assignment: 'The Best Years of Your Life'.

David Wilson 10E Candidate Number: 9131 St. Bernard's Catholic High School Rotherham Centre Number: 36449 MGM 4 28/4/03 20th Century Drama Assignment: 'The Best Years of Your Life' For some people, Cancer is a disease that you contract by saying it. Others do not acknowledge cancer or the people who are unfortunate enough to contract the illness. For the past few weeks in English we have been studying the play, 'The Best Years of Your Life'. It is a story of a young footballer named Robert, who plays for the Chelsea youth team and contracts spinal cancer at the age of 17. In this assignment, I will follow the character of Mark (Mk) throughout the play and show how he changes and develops to cope with Robert's (Rob) illness and in the next part I will direct scene 6 for a television audience. (A transcript of this scene will be included at the end of my assignment.) The first part of my assignment will be the character study of Mark to show how he develops and changes to cope with Robert's illness. At the start of the play, Mk is anxious as to how Rob's operation went to remove the tumour from his spine, 'Dad, what'd he say, ow'd it go, the operation, ow'd it go?' Mk Scene (S) 2 Page (P) 5 This shows that he is craving information. ...read more.

Mk S7 P24 Then he makes excuses like: 'Only went to get a bag of crisps' Mk S7 P25 and 'Well, I bumped into Derek-' Mk S7 P25 Then, when Rob makes a comment about Reg, he tells him not to worry about him 'You're not going to start taking what Reg says seriously are you?... how can you expect them to- ' Mk S7 P25 A few lines later, Rob starts talking about death for a while. Mk soon gets sick of this, '(Suddenly exploding) Just shut it Rob all right? Shut up!' Mk S7 P26 Then they both finally get to sleep and we don't hear any more until scene 8. In scene 8, Mk is sat in the living room with his father when they start to talk about Rob. 'Well 'e wouldn't have would he?...I'm sure he could drop dead in front of you and you wouldn't even notice! ' Mk S8 P28 He is defending Rob verbally because his father has had nothing to do with him since he has contracted cancer. His father's escape is through drinking alcohol, 'O yeah, have another drink! That'll solve everything! ' Mk S8 P29 In a way he is defending Rob by telling his father not to keep drinking his problems away. In the next scene, Mk has changed his attitude towards cancer, 'Keep fit... Twice around the estate' Mk S9 P29 He seems to think that if he is fit, he won't contract the disease. ...read more.