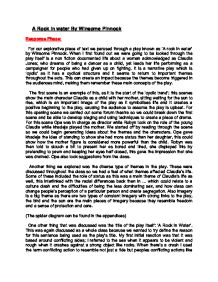 A rock in Water

A Rock in water By Winsome Pinnock Response Phase: For our explorative piece of text we perused through a play known as 'A rock in water' by Winsome Pinnock. When I first found out we were going to be looked through the play itself is a non fiction documented life about a woman acknowledged as Claudia Jones; who dreams of being a dancer as a child, yet leads her life performing as a campaigner for people who had given up on fighting. It is a narrative play which is 'cyclic' as it has a cyclical structure and it seems to return to important themes throughout the acts. This can create an impact because the themes become triggered in the audiences mind, making them remember these main concepts of the play. The first scene is an example of this, as it is the start of the 'cyclic trend'; this scenes show the main character Claudia as a child with her mother, sitting waiting for the sun to rise, which is an important image of the play as it symbolises life and it creates a positive beginning to the play, causing the audience to assume the play is upbeat. For this opening scene we carried out some forum theatre so we could break down the first scene and be able to develop staging and using techniques to create a piece of drama. ...read more.

She showed her affection by constantly watching the bird and gently touching it. This presented Claudia as gentle and caring. ... Playing Ben kept looking over to catch a peep of the bird and began to sulk when 'he' didn't get his own way. The fight towards the end is a powerful part of the scene as it shows the racial differences back then when Ben states ' well your too big, black and ugly to be a dancer'. This part links with scene three as it shows the bird dying; this could have a metaphorical meaning, as it also resembles the loos of freedom back then; which relates to the life of Claudia when she is imprisoned. Scene three demonstrates the difficulties back then for people who were considered 'outcasts' for being a different race. This scene shows how Claudia's mother dies at work due to overworking so she can care for her family. We read through this scene so we could fully understand it. This also shows how naive the child Claudia is as she believes that she can be a dancer, but the reality is that back then a person of her colour would be ' washing white woman's filth'. One thing we did to understand the character Claudia a bit more was to establish words to describe her and then to produce a sound collage including these words. ...read more.

Verity and Andrea bequeathed us with a separate line from everyone to illustrate the differences between each one. I was provided with the phrase 'TB sufferer'; this exhibited her weak physical side however mentally she was a strong willed person. A numerous amount of people suggested that our formation should be presented as a heart because it displayed that everything she achieved and accomplished in life was from her heart. We introduced our piece by facing outwards while in the heart formation, we held a picture of Claudia Jones to the audience to show that this sound collage was about her. We then took it in turns to say our word out loud to create the sound. When we said our word we then turned inwards to face the inside of her heart. This showed how the heart is a metaphorical symbol as it can signify many things. When we said our word we turned our picture of Claudia over to present the word printed in bold. I feel that it was an acceptable performance although it needed to be improved because I don't believe that we deposited a lot of effort into it. Also we could have spoke at the same time to construct a collage rather than a word by word account of who she was. Another way that we could discover Claudia by reading the middle scenes of the play. ...read more.