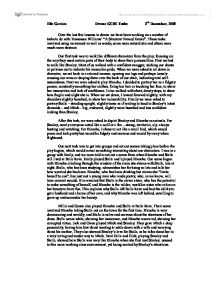 Over the last few lessons in drama we have been working on a number of tasks to do with Tennessee Williams' "A Streetcar Named Desire". These tasks involved using movement as well as words; some were naturalistic and others were much more abstract. Our first task was to walk like different characters from the play, focusing on the way they used certain parts of their body to show their personalities. First we had to walk like Stanley. Most of us walked with a confident swagger, sticking our chests or pelvises out to indicate his masculine pride. When we were asked to sit down in character, we sat back in a relaxed manner, opening our legs and perhaps loosely crossing our arms or draping them over the back of our chair, indicating total self-assuredness. Next we were asked to play Blanche. I decided to portray her as a fidgety person, constantly smoothing her clothes, fixing her hair or touching her face, to show her insecurities and lack of confidence. ...read more.

It is revealed that Stella is the clever sister, who has the potential to make something of herself, and Blanche is the wilder, worldlier sister who relies on her beauty to have fun. This explains why Stella left Belle Reve and had the ability to get a husband and a home of her own, and why Blanche was left behind, unwilling to grow up and surrender her beauty. Millie and Genna also played Blanche and Stella at Belle Reve. Their scene involved Blanche taking Stella out on the town for the first time. Blanche is very domineering and worldly, and Stella is na�ve and nervous about the shortness of her dress. Stella wears white, showing her innocence, and Blanche wears red, showing her corrupted virtue. Jack and Owen played Mitch and Stanley. They gave Mitch a deep personality, having him hint about wanting to settle down with a wife and worrying about his mother. They also showed Stanley's love for Stella, as he talks about her in a very loving and tender way to Mitch. ...read more.

I was in a group with Felix and Alex. Felix played Stanley, Alex played Blanche and I played Stella. The moments we marked were: Stanley throwing plates off the table; Stella and Stanley on the porch with Blanche on the phone, trying to reach Mitch; Stanley giving Blanche a ticket back to Laurel; and Stella going into labour. For each of our important moments, we froze in position for four seconds, before doing an action and moving onto the next moment. There were subtle differences between each group's piece; instead of using an action, as we did in ours, Millie, Flick and Jack used an important line of text in each of their moments, which I found very effective. Although I found these tasks challenging (especially as I knew we were on camera), I enjoyed interpreting different characters in new ways. I also worked with different people to whom I normally would, which was a good experience and made me enthusiastic and eager to work with them again in future lessons. ?? ?? ?? ?? Ella Gordon Drama GCSE Tasks 3rd December, 2008 ...read more.