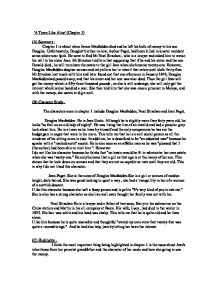 'A Town Like Alice' (Chapter 1) (A) Summary : Chapter 1 is about when James Macfadden died and he left his bulk of money to his son Dougles. Unfortunately, Dougles' brother-in-law, Authur Paget, had been killed in amotor accident some-where near Ipoh. He went to find Mr Noel Strachen , who is a lawyer and asked him to revise his will to his sister Jean. Mr Strachen told him that supposing that if he and his sister and the son Donald died , he will terminate the estate to the girl Jean when she became twenty-one. However, Dougles Macfadden despise woman and only allow her to inherit that estate until she's thirty-five. Mr Strachan lost touch with him and later found out that one afternoon in January 1948, Dougles Macfaddenhad passed away, and that his sister and her son was also dead. Thus the girl Jean will get the money which is fifty-three thousand pounds , as she is still underage, she will only get the interest which isnine hundred a year. She then told him that she was once a prisoner in Malaya, and with the money, she wants to dig a well. (B) Character Study : The characters seen in chapter 1 include Dougles Macfadden, Noel Strachan and Jean Paget. Dougles Macfadden- He is Jean Uncle. Although he is slightly more than forty years old, he looks "as frail as an old lady of eighty". He was living the live of an invalid and had a peculiar grey look about him. ...read more.

(B) Character Study : The characters seen in chapter 3 include Mrs Frith, Joe Harman and Captain Sugamo. Mrs Frith-She is one of the prisoners who travelled with Jean and was a faded anaemic little woman of over fifty. She could only speak a few words of Malay but had a considerable knowledge of the country and its dieseases. This tells me that she is actually quite wise. I like this character because she help to buoyed the group up when they were down as her health started to improved. Jeo Harman-He is a fair-haired powerfully built man about twenty-seven or twenty-eight years old who is an Australian. He worked as a truck driver there in Kerling. I like this character because he is a very helpful man who tries to get whatever he cans to provide the group and when he sees that the woman prisoners were quite thin, he manage to get some meat for them regardless what the conquences were. Captain Sugamo- He is a Japanese commanding officer who was a very angry and curel man and is not easily satisfied with things.However I do not like this character as he tortured people and cricified Joe Harman for stealing the chickens and he even nailed him to a tree. (C) Highlights : I think the most important thing being highlighted in Chapter 3 is the issue about how Joe Harman help them and how he tried to get food and stuff for them. 'A Town Like Alice' (Chapter 4) ...read more.

Rose Sawyer-She is a girl who Jean met in the milk bar. She is about eighteen and had an Aberdeen terrier on a lead; She worked in a dress shop. I like this character because she is quite thoughtful for others and is a nice person. (C) Highlights : I think the most important think in Chapter 6 is that Jean thinks that Alice Spring is a bonza place and that Joe Harman is also looking for her and will be back about a month. 'A Town Like Alice' (Chapter 7) (A) Summary : Chapter 7 is about when Jean had reached Carins and wrote a letter to Mr Strachan and told him that it's terrible at Willston and that Alice Springs is a grand town. She also said that She want to set up a shop and employ up to ten girls and needed about five-thousand pounds. After Mr Strachan read it, He decided that it is quite reasonable. Jean also wrote a letter to Joe Harman telling him that she will meet him there. When Joe Harman saw her, he was surprised to see that this smart, pretty girl in a light summer frock was that girl his has seen on the road of Malaya, sunburnt, dirty, bullied, by the Japanese soilders with blood on her face. They soon got married and their children were born. (B) Character Study : Jean became a more sensible person and has a large cliff in her apperance when she was now that in Malaya. (C) Highlight : I think the most important thing being highlighted in Chapter 7 is that Jean and Joe Harman got married. ...read more.