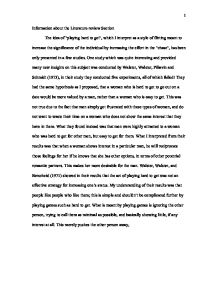 According to psychologists, playing hard-to-get can be an effective technique for gaining and keeping

Information about the Literature-review Section The idea of "playing hard to get", which I interpret as a style of flirting meant to increase the significance of the individual by increasing the effort in the "chase", has been only presented in a few studies. One study which was quite interesting and provided many new insights on this subject was conducted by Walster, Walster, Piliavin and Schmidt (1973), in their study they conducted five experiments, all of which failed! They had the same hypothesis as I proposed, that a woman who is hard to get to go out on a date would be more valued by a man, rather than a woman who is easy to get. This was not true due to the fact that men simply get frustrated with these types of women, and do not want to waste their time on a woman who does not show the same interest that they have in them. What they found instead was that men were highly attracted to a woman who was hard to get for other men, but easy to get for them. What I interpreted from their results was that when a woman shows interest in a particular man, he will reciprocate those feelings for her if he knows that she has other options, in terms of other potential romantic partners. ...read more.

"It's like a necessary evil that's essential to the relationship," he says. "I don't enjoy playing the game or get any thrills out of it, but when we aren't challenged by each other, things can go downhill overnight." Hoffman agrees. She says she and McCauley are the type of people who can't bear the thought of getting into a routine. "We have to keep that element of surprise and guessing there," she says. "Kirk and I never get bored with each other because there's always a challenge there." So they always wait a while before they call each other back and make sure that they're not too accessible for each other. Of course, they have been dating OFF-AND-ON for two years now. But many people play hard-to-get when they first meet someone, and they don't know if the person is interested at all. That's when they have to be careful, Hill says. "It's safe to say that playing hard-to-get works, but be careful about what it works at doing," he advises. "It may work at pissing off the person you're trying to attract." Mowery says the plan has backfired on her in the past. "It works sometimes," she says. "But sometimes, the guy just thinks, 'Oh screw her! She doesn't like me.'" There has to be some indication that the person is interested for the game to work, Ditto says. ...read more.

Consequently, by the end of the first year, she had very few friends and no boyfriends. "When most people get nostalgic about college days, I have nothing to say. What is the greatest time for most people, was a nightmare for me and it was all my own fault." Today, she is a very different person and isn't making the mistakes of her college days. If it backfired for Ananya and many others, men too don't like women who play too hard to get. "It's really irritating when a girl just puts up an act of indifference. Men can usually see through it. We aren't as foolish as women think us to be," says Siddharth, a copywriter with a leading ad agency. He's of the opinion that women should quit "such stupid mind games which did well in Victorian times", and be direct and open. But then don't they get the wrong opinion? "We aren't asking you to jump into our arms. Just say yes when you feel like it, instead of making lame excuses like I-have-a-dentist's-appointment when we ask you out." Point noted. Being 'unavailable' is pretty much like flirting. Unless you're able to do it the right way, it's bound to boomerang badly. So How Do You Learn To Do It The Right Way? Trust your gut instinct. And to a small extent, by trial and error. And remember - you're going to win some and lose some. But don't lose heart, have fun. ?? ?? ?? ?? 1 ...read more.