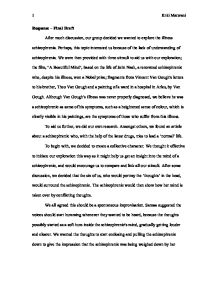 After much discussion, our group decided we wanted to explore the illness schizophrenia.

Response - Final Draft After much discussion, our group decided we wanted to explore the illness schizophrenia. Perhaps, this topic interested us because of the lack of understanding of schizophrenia. We were then provided with three stimuli to aid us with our exploration; the film, "A Beautiful Mind", based on the life of John Nash, a renowned schizophrenic who, despite his illness, won a Nobel prize; fragments from Vincent Van Gough's letters to his brother, Theo Van Gough and a painting of a ward in a hospital in Arles, by Van Gough. Although Van Gough's illness was never properly diagnosed, we believe he was a schizophrenic as some of his symptoms, such as a heightened sense of colour, which is clearly visible in his paintings, are the symptoms of those who suffer from this illness. To aid us further, we did our own research. Amongst others, we found an article about a schizophrenic who, with the help of the latest drugs, tries to lead a 'normal' life. To begin with, we decided to create a collective character. We thought it effective to initiate our exploration this way as it might help us get an insight into the mind of a schizophrenic, and would encourage us to compare and link all our stimuli. ...read more.

I had overacted and my character's thoughts went somewhat like this: "Should I hurt her? No, that would be a sin. But she is trying to harm me, so why can't I hurt her in my defense?" To depict a clear difference between the 'normal people' and the schizophrenics, we have used space and levels. Hana is up right, making apparent that she posses no signs of abnormality, whereas I was lying on the ground, further away from her, to show the complete opposite. This still image showed how schizophrenics' thoughts keep conflicting and how paranoid they are. It also builds up tension amongst the audience, given that they are unacquainted with such reactions. I feel that it also demonstrates how everyday situations can make a schizophrenic feel intimidated. Through this exercise, we gained thorough understanding of people's attitudes towards schizophrenics. Our next task was to divide into two groups, one representing Van Gough's era and the other, John Nash's era, so that we could compare and contrast attitudes towards schizophrenics in the past and the present. Each group began by creating six still images, then develop them into short scenes and then cross-cut between the two groups. ...read more.

Some of the hot seating were successful. I thought Samaa's was the most interesting. She sat on the chair with her feet on the edge of it, and was holding on to her toes as though she was preventing them from falling off. She later explained why she was holding on to her toes so protectively. "That cat is trying to bite them off." She also added that all the nurses and doctors 'lied' about not seeing the cat she was petrified of. This proved to us that she was role-playing a schizophrenic. Those who had succeeded in the hot-seating had obviously put much thought into their characters, whilst the others needed to have a clearer idea of whom they were trying to portray. After conducting some research and thoroughly studying the three stimuli, I have come to notice that most schizophrenics are either very talented people, or geniuses. A few examples are John Nash and Van Gough themselves, and then there is Antoin Artaud, a dramatist and artist, who is suspected of suffering from schizophrenia; Lionel Aldridge, a football player and Vaclav Nijinsky, a famed Russian dancer. It has also come to my notice that both Van Gough and John Nash were social outcasts. Van Gough was disliked by most of the people he acquainted with. Similarly, John Nash was rejected by most of his fellow students. 1 Kriti Matwani ...read more.