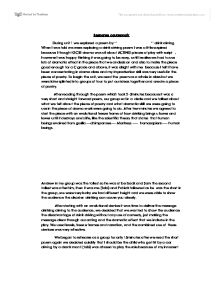 After starting with an evolutional device it was time to deliver the message drinking driving to the audience, we decided that we wanted to show the audience the disadvantage of drink driving without any use of comedy

During unit 1 we explored a poem by ‘’                                     ‘’ drink driving. When I was told we were exploring a drink driving poem I was a little suspired  because I thought GCSE drama was all about ACTING pieces of play with script  , however I was happy thinking it was going to be easy, until I realise we had to use lots of dramatic effect in the piece that we analysis on and also to make the piece good enough for a C grade and above, it was alright with me because I felt I have been concentrating in drama class and my improvisation skill was very useful in the piece of poetry. To begin the unit, we read the poem as a whole in class but we were later splinted into groups of four to put our ideas together and create a piece of poetry.

After reading through the poem which took 2-3minutes because it was a very short and straight forward poem, our group sat in a circle and we talked about what we felt about the piece of poetry and what dramatic skill we were going to use in the piece of drama work were going to do. After few minutes we agreed to start the piece with an evolutional freeze frame of how drinking brings u lower and lower until it destroys one’s life, like the scientific theory that states that human beings evolved from gorilla----chimpanzee---- Monkeys -----  homosapiens----- human beings.

Andrew in my group was the tallest so he was at be back and Sam the second tallest was after him, then it was me (Tobi) and Patrick followed as he was the short in the group, we were very lucky we had different height and we were able to show the audience the disaster  drinking can cause you clearly.

After starting with an evolutional device it was time to deliver the message drinking driving to the audience, we decided that we wanted to show the audience the disadvantage of drink driving without any use of comedy, just making the message clear through our acting and the dramatic effect that we include in the play. We used levels, freeze frames and narration, and the combined use of these devices was very effective.

We began to rehearse as a group for only 15minutes after we read the short poem again we decided quickly that I should be the child who get hit by a car driving by a drank man I (tobi) was chosen to play the role because of my innocent looking face and my ability to act in any character facial expression very well, Andrew was chosen to be mum because of his long hair and his ability to change his voice to make is soft and more girly like, Patrick was to be the drank father because of pass experience he had of been a father in previous play that we have been going in year10. And Sam.P play main narrator and even if everybody spoke in the play he was the main narrator he had to move to give the rest of the character clue to speak and he was very successful even as we had very little time to rehearse for the play, all together with our strength, physical theatre and dramatic device we were able to deliver the message in the way we wanted and was to extents successful.

We did not have enough time to rehearse this piece but with our good use of improvisation we were able to act this piece of work to satisfaction. We were going to play role of character most of us had never played before, I suggested to the group to make the piece done on a sympathetic note to make audience know the danger of drunk driving, additionally I hoped that this would help to stimulate my mind and idea as well as everybody else in the group about how to stage and perform scenes effectively. After reading though the poem, as I hoped we were full of ideas collectively. When we had listened and discussed everyone’s suggestions, we decided on working on a flashback drink driving where the boy who had been hit by a drunk driver was talking to his mum and his dad is drunk, the boy starts to wonder why people drink alcohol as he ask his mum, and at the same time his dad his starting to wonder why he drinks and what drinking has done to him. We decided to stage the piece end on to cast the audience in the role of spectators looking on rather than active participate as they would have been if we had stage it in a round and they didn’t need to participate.

In the flash back scene of our piece we used narration and body language to show to the audience what each individual is feeling at the moment in time, and there was use of physical theatre where Sam was a chair for Patrick(dad) to sit on it make our piece more dramatic.

The father in the piece (Patrick) was a drunkard he had started worrying why he drunk, but could not stop drinking he had a heart attack. At this moment in the play the audience feel a bit of pity for the dad but also received the message that alcohol drinking can be very dangerous to ones health.

As our performance progress, there was a scene were everybody except Tobi (me), the rest of the character were gathered in a group, but Tobi was alone in a corner of the stage, this was in a freeze frame so it was not very clear what was going on but the audience focused their attention on Tobi, because he was all alone in a corner of the stage, then the narration started and we started to act it was now clear that Tobi was in a party with drunker but he did not drink, then the drunkard around him, showing the pressure he could have been going through weather to drink or not, then there was an accident Tobi had been hit by a drunk driver.

This scene make the audience have sympathy on the innocent child who had not drank in the party because he still had to get run over by a drunk driver, this also show the audience that they should not ignore drunkard, instead help them because innocent people suffer from the stupidest of drink drivers, and in this scene the staging was very dark (lighting) to show how having horrible drinking can turn when the boy was on the fall they was use of level as two drunks were staggering and the boy and is mum was were on the fall in different levels, just like the evolutional device use in the first scene as the tallest person started speaking the light got lower and lower  until it got to the shortest person .

However With more time for rehearsal and practice we would have done a lot more, we would show the lighting man how we wanted the light to be set in the evolution device scene were we wanted the light to go lower and lower as each character spoke, however our improvisation skills was well used with more time we would have also turn the word of the poem into our word to make the audience understand the meaning f every word that we spoke.

Our piece of work was very good in the way we use dramatic technology to deliver the message to the audience, I think we evoked a response from our audience because we could see all member of the audience focus and there facial expression showed they sympathise with characters in the play and after class they came to me to tell my group how well we did, over 60% of people who came to me commented on the first scene of evolution device that we used to show drinking takes you lower and lower until it destroys  one’s life and that make me know that our piece of work was very successful because it evoke a sympathetic emotion on the audience as a whole.

There were other groups in the class and each group did a very good job in the way they portray there character and the way they delivered the message to the audience, Sam C’s evoked a more comedic like emotion and also in the way his group delivered the message, they showed how people would act toward a drinker whose life has been ruined by alcohol drinking , the audience responded to the play well as they interpreted what they saw as a drunk who hits an innocent person and the ghost of the innocent was hunting him.

In conclusion think my group and other groups did very well in the different ways we use to evoke response from the audience, using comedy and tragedy and also use of dramatic devices we use to present our piece of work to the audience.