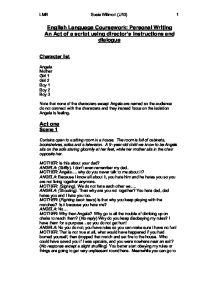 An Act of a script using director's instructions and dialogue

English Language Coursework: Personal Writing An Act of a script using director's instructions and dialogue Character list Angela Mother Girl 1 Girl 2 Boy 1 Boy 2 Boy 3 Note that none of the characters except Angela are named so the audience do not connect with the characters and they instead focus on the isolation Angela is feeling. Act one Scene 1 Curtains open to a sitting room in a house. The room is full of cabinets, bookshelves, sofas and a television. A 9-year-old child we know to be Angela sits on the sofa staring gloomily at her feet, while her mother sits in the chair opposite her. MOTHER: Is this about your dad? ANGELA: (Stiffly). I don't even remember my dad. MOTHER: Angela.... why do you never talk to me about it? ANGELA: Because I know all about it, you hate him and he hates you so you are not living together anymore. MOTHER: (Sighing). We do not hate each other we.... ANGELA: (Shouting). Then why are you not together? You hate dad, dad hates you and I hate you too. MOTHER: (Fighting back tears) Is that why you keep playing with the matches? Is it because you hate me? ANGELA: No... MOTHER: Why then Angela? Why go to all the trouble of climbing up on chairs to reach them? (No reply) Why do you keep disobeying my rules? ...read more.

No I do not! They all nod their heads mockingly and continue with their laughs and 'ooooo's. BOY 1: (When he stops laughing). Well my mum told me to stay away from her. GIRL 1: Yeah, I heard that she set her tree on fire! GIRL 2: (Excitedly) Yeah! With matches! BOY 3: No, my mum said that she started a fire in her house and its nearly burnt to the ground! BOY 1: That is not true! BOY 3: My mum said though! Boy 1 looks like he is about to retaliate, when Girl 1 spots Angela. GIRL 1: Hey, there she is! GIRL 2: Oh yeah. They all turn and watch Angela as she sits down by herself against a wall. Smirking, the girls walk over to her, the boys stay behind and watch. GIRL 1: Hi Angela. ANGELA: Hi They look inquisitively at each other for a few seconds, GIRL 1 waiting to be asked her name. When she receives no such question, she presses on. GIRL 1: Do you want to play with us? GIRL 2: We are going to play mummies and daddies. ANGELA: (Brightening) Yeah okay! GIRL 2: Okay, I want to be the mummy! GIRL 1: Oh! I want to be the mummy though... GIRL 2: Okay, I will be the daughter instead, you be the daddy Angela. ...read more.

ANGELA: Thirteen, fourteen, fifteen... The girls giggle quietly, for a few seconds. ANGELA: Eighteen, nineteen... As a group, the boys and girls sneak up to the door, Girl 2 starts incessantly giggling and the others pull the door shut with a loud bang. ANGELA: Twenty-five...hey! What? Boy 1 quickly turns the key in the lock, the others laugh hysterically and boy 3 rolls around on the floor with laughter. Angela bangs on the door; her words cannot be heard over the laughter. After a few seconds, the children beam at each other and run offstage, boy 3's laughing still distinguishable but fading away into the distance. Lights fade on the corridor and the audience's attention goes to Angela. ANGELA: (Banging her fists against the door) Let me out! Let me out! Help I am stuck! Help! She continues to bang her fists against the door for a few more seconds, then backs away from the door and falls into a wall of mops and buckets, she falls backwards and lands with a thump on the ground, buckets etc falling down from the shelves. Angela brings her knees up to an embryonic position; she then begins to cry, rocking herself backwards and forwards slowly. The light dims a little bit more and Angela's cries become louder, her rocking becoming stiffer until she is almost completely rigid; her back continuously thudding against the back wall of the cupboard. Lights fade to blackout, but the thudding and Angela's cries continue for a few more seconds. Curtains fall. End of Act One. LMB Susie Willmott (U10) 1 ...read more.