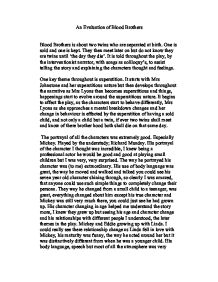 An Evaluation of Blood Brothers

An Evaluation of Blood Brothers Blood Brothers is about two twins who are separated at birth. One is sold and one is kept. They then meet later on but do not know they are twins until 'the day they die'. It is told throughout the play, by the interventionist narrator, with songs as soliloquy's, to assist telling the story and explaining the characters thought and feelings. One key theme throughout is superstition. It starts with Mrs Johnstone and her superstitious nature but then develops throughout the narrative as Mrs Lyons then becomes superstitious and things, happenings start to evolve around the superstitious nature. It begins to affect the play, as the characters start to behave differently, Mrs Lyons as she approaches a mental breakdown changes and her change in behaviour is effected by the superstition of having a sold child, and not only a child but a twin, if ever two twins shall meet and know of there brother hood both shall die on that same day. The portrayal of all the characters was extremely good. Especially Mickey. Played by the understudy; Richard Munday. His portrayal of the character I thought was incredible, I knew being a professional actor he would be good and good at playing small children but I was very, very surprised. ...read more.

Simply by bringing on most of the set and props, he becomes a very important part of the play. As the play goes on he beings to affect the play more and interfere. When Mrs Johnstone agrees to sell Mrs Lyons one of the twins, the interventionist narrator hands Mrs Lyons the bible so as to make Mrs Johnstone swear upon it. This is a good example of when the narrator interferes. Not only this but he plays on the characters conscious, playing with their minds, this is where, the songs as soliloquies come in, the narrator whispering in the characters ears, telling them what's right, telling them what's wrong. This adds a lot of dramatic tension to the play, because the narrator becomes very influential. One of the most powerful drama techniques used in blood brothers is the action before narrative. It has such a powerful ending that at first I thought it would take away from that but from seeing it I understand that it doesn't and even gives more to the play and ending. It's all done in silence, which adds dramatic tension in its self because it leaves the audience thinking and questioning. Even though the audience know what happens at the end, it is still shocking when it comes. ...read more.

The change in lighting from dark to light at different points in the play is well used, the lights darken a lot when the narrator speaks to add dramatic affect, to his normally powerful but solemn speeches, being and interventionist narrator, always interfering this adds greater affect making his role even more mysterious. The lighting when he hands Mrs Lyons the bible is very affective, the narrator in darkness with his back to the audience and his hand and Mrs Lyons spot lighted gives great affect like a grave idea or action being planted so darkly from the shadows. The lighting I think as well as adding affect, gives to the audiences' response more, so they enjoy the play to a greater extent. I thought the play was very, very powerful and I really loved it. You can tell that everything in the play is there for a reason, every prop and every lighting effect is obviously thought out, it adds so much effect and drama. Everything has a meaning and purpose, the play is very symbolic and influential. It has a very powerful ending, with a lot of dramatic potential. I thought Eddie and Mickey not finding out they were twins was very good, as it used a lot of dramatic potential, prolonging the drama, making the ending more impacting and shocking when it happened. I loved the entire play but I thought the ending was so unexpected that it made the play incredible and dominating. ...read more.