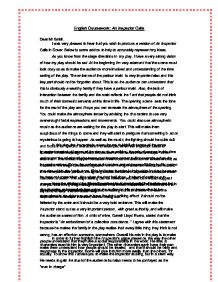 An Inspector calls - A letter to Mr.smith from Mr J B Priestly.

English Coursework: An Inspector Calls Dear Mr Smith, I was very pleased to hear that you wish to produce a version of An Inspector Calls in Dover. Below is some advice to help to accurately represent my ideas. As you know from the stage directions in my play, I have a very strong vision of how my play should be set. At the beginning I'm very adamant that the scene must look cosy so as to make the audience more involved and understanding of the time setting of the play. The entrance of the parlour maid is very important also and this key part should not be forgotten about. This is so the audience can understand that this is obviously a wealthy family if they have a parlour maid. Also, the lack of interaction between the family and the maid reflects the fact that people did not think much of their domestic servants at this time in life. The opening scene sets the tone for the rest of the play and I hope you can recreate the atmosphere of the opening. ...read more.

For example, when the inspector arrives, Edna, the parlour-maid, enters and addresses Birling by Sir, yet no one else within the family does. This indicates that she is below him in class because he does not correct her. Also when the door bell rings, instead of getting up to answer the door, Birling says "Edna'll answer it" which suggests that she is meant to do everything for the household. Instead of asking Edna to answer the door, he expects her to answer the door, without being told. I see the moment the Inspector arrives as a central point in the play and he should make an immediate impact on the audience. His entrance should be dramatised in the right way as to have the right, striking effect. It should not be faltered by the actor and it should be a very bold entrance. This will make the Inspector stand out as a very important person, with great authority, and will make the audience scared of him. A critic of mine, Gareth Lloyd Evans, stated that the inspector is "An embodiment of a collective conscience. ...read more.

He can be made stronger in his opening speech. By doing this the audience will understand that when the Inspector enters there will be conflict between them both. One of the key moments in the play is when the telephone rings at the end to repeat what has already happened during the evening. This is a key moment because the audience will be very confused as to what is going on. Here I think you should direct your actors to use very bold facial expressions to either show that they are confused or that they are upset. This will make the audience understand that it is alright to be confused. In addition, strong use of lighting, props, movement and positions of the actors is very important, as it will also help to develop the confusion and distress of the situation. For example, if Sheila is cclutching her brther Eric, or hugging her mum, we will see that she is in a fragile state and the audience will sympathise with her. Overall I would hope you create a feeling of confusion amongst the audience so they will all go home and tell each other how they were left confused at the end of your play! Good Luck n your production, Mr Smith Yours Sincerely Mr J B Priestly ...read more.

There are many strengths to this piece of work. As a letter written from the perspective of Mr Priestley, the 'voice' is mostly authentic. The student clearly has a good understanding of the theatricality of the play, and the potential impact moments will have on an audience. However, to ensure a high grade, ensure that points are always specific and developed. If they are vague or insufficiently developed or not linked to the question you are answering, you won't get the full marks available. As highlighted, extra marks are available for SPaG so it is worthwhile ensuring the essay is as accurate as it can be.