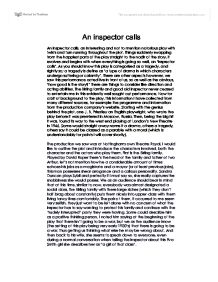 An inspector calls An inspector calls, an interesting and not to mention notorious play with twists and turn running throughout the plot. Things suddenly swapping from the happiest parts of the play straight to the nadir of the story, it evolves and begins with when everything is going so well, an 'inspector calls'. As you should know this play is categorised as a tragedy, and rightly so; a tragedy is define as 'a type of drama in which characters undergo suffering or calamity'. There are other aspects however, we saw this performance acted live in front of us, so as well as the obvious, 'how good is the story?' there are things to consider like direction and acting abilities. The Birling family and good old inspector never ceased to entertain me in this evidently well sought out performance. Now for a bit of background to the play, this information I have collected from many different sources, for example the programme and information from the production company's website. Starting with the genius behind the plot, one J. B. Priestley an English playwright, who wrote the play before it was premiered in Moscow, Russia. Then, being the big hit it was, found its way to the west end playing at London's New Theatre in 1946. Some would straight away name it a drama, others a tragedy, others say it could be classed as a parable with a moral (which is understandably for points I will cover shortly). ...read more.

And talking of Eva Smith, there is no actor representing her so they can't do all the standard dramatic devices for the audience to feel a certain way about her. Nevertheless by the end we certainly feel sorry for this unknown woman, maybe that's down to the ingenious story... but that wouldn't have been complete had Inspector Goole (Louis Hilyer) not asked his questions with the authorative tone, asking rhetorical questions with emphasism on certain words and phrases getting the audience thinking. Louis at the beginning seemed to be rudely interupting the party, maybe this was the intention of the writer, so that when we actually do listen to what the inspector has to say our point of view changes. There are a few apparent comic moments for example Sandra Duncan seemed perfect with her role as Sybil, perfectly fitting how we wouldv'e imagined the woman to look like had we only only looked through the script. Having glanced through the script myself it descibes her at the begging as, "about fifty, a rather cold woman and her husband's social superior." Her long pauses as she searches for words and funny facial expressions made for some comedy moments even in times of grave seriousness. I very strongly remember the first time she spoke, the majority of the audience gave a loud giggle, they weren't expecting a high-pitched snobbish voice from a seemingly innocent character. ...read more.

There were also a collection of random extras hanging about appearing at random points, however all of there critical points I have made I perfectly understand the reason behind them and why the director would have put them in. Obviously towards the end of the play there is a sense of confusion among all of the Birling family, the running about of children, the extra characters on stage all add to make a feeling of rush between characters. and a sudden rush creates more confusion! Now, the overall performance, it was certainly an entertaining piece that actually with it's deep moral got me thinking afterwards which I guess and can safely presume was the writers intention. It did keep me interested throghout with the constant twists and turns in plot and fate, but I did almost loose interest during the very first scene in the party as they seemed to just drag on, I understood how the family were related with the engagement and easily picked up who the inspector was without a second glance. But back to my overall view, I wouldn't hesitate to recommend this to a friend but I may have filled them in on a few little parts and introduced a few characters to them before hand, else I only started enjoying the story part way through on word of a suicide. In the end though it came together perfectly for a play which is known the world over I did enjoy it. ...read more.